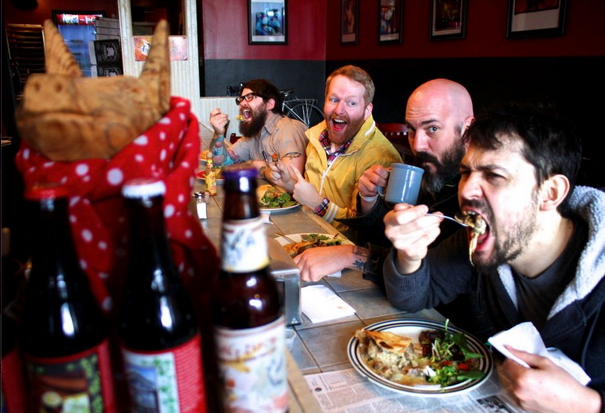 Amidst their time touring with PUP and Chumped, the extremely charismatic members of Typefighter were kind enough to help me learn some more about them. I got to talk with Ryan McLaughlin, Thomas Orgren, John Scoops, and Will Waikart–the guys that make up Typefighter–before their show at New York City’s Mercury Lounge to ask them some questions:

How would you guys describe your music?

Ryan: I guess we identify as garage pop, that was kind of the brand that we went with.

What’s the story behind the name Typefighter?

Ryan: A really, really bad joke. I was at a friends house—Ryan Little plays in a band called Tereu Tereu, they’re from DC and they’re great—but I was at one of his old houses and he had some type writer on display and he said something about it being his grandfather’s during World War II, and it ended up being like…he wasn’t able to physically fight in it so it was a Typefighter.

So did you guys have a name before that?

Ryan: No, but we were gonna change our name and we ended up pretty much not changing the name, but it started a band name list that now has gotten to be like 200 names. It’s gotten to be a game, it’s a lot of fun.

How long have you been together?

Ryan: I guess under the name Typefighter about 5 years, but it’s a pretty different lineup than what it started out as. Actually, it’s a completely different band than what we started out as; we were pretty folky before and very acoustic, and now we’re very much not.

What are you musical influences?

Ryan: We all come from pretty different musical backgrounds. When people ask what we sound like, or to compare ourselves to bands we’d say Weezer or Jimmy Eat World or 90’s kind of rock. As far as direct influences, not so much other than just personal influences for us as individual musicians. Top 5 for me: I got really into Radiohead, Michael Jackson was huge growing up, and then Converge, Minus the Bear and Pinback at the same time for a very long time, and Tom Waits.

John: As a kid my parents’ Mowtown records—me and my sister used to listen to Fugazi…and Tim Karns he’s a bass player from DC who’s been in a bunch of DC ska bands and now he plays for The Toasters and he’s amazing and my hero. He’s kinda the reason I started playing bass.

Will: I also grew up on Mowtown, a heavy dose of that. And I actually I feel like I’m pretty influenced by—I studied classical music in college—so that certainly changed my approach. Even though what I do now has nothing at all to do with it, it sort of changes the way that I approach writing parts, I guess.

Thomas: I knew every word on 90’s alternative rock radio, and then I got really, really, really like really, horribly, deeply into Phish in high school. Which I just discovered, I was talking with Steve from PUP last night and he also was a huge Phish fan. So in this world to actually run into another ex-Phish fan, I actually put on some Phish after we talked about it and it was completely unlistenable. I expected to like it more than I did, it was kind of disappointing. But then I discovered things like Pavement and DC punk rock stuff like Fugazi and it was all over.

What were all of you doing before music…if you weren’t musicians, what direction do you think you would be going in?

Ryan: I work with food, so I’ve kind of a long time ago decided that that was all I was going to end up being good at: music and food. So if music doesn’t work out, Food is my number two. And if that doesn’t work out then….nothing.

John: I would have been a pro golfer. I used to work at a golf course and I would golf all the time, but I stopped doing it. After high school I didn’t have time for it anymore.

Will: I’ve never done anything else. I’m totally worthless.

Is there anything you want people to know about you?