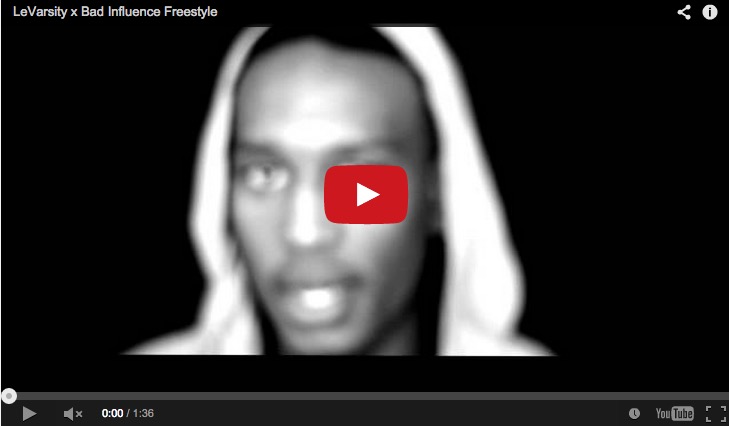 Born and raised in Brooklyn, New York, Levar Desty is the most energetic guy in the room. His ability to be both a powerhouse of hilarity while also knowing when to sit back and observe gives him an interesting and addictive personality. I sat down with LeVarsity to find out about his passions, aspirations, and other thoughts concerning his future as a rapper.

What was the first album you remember falling in love with? That’s an easy one! The College Dropout. I remember going shopping for something with my mom. I can’t remember what she was looking for, but I remember leaving her and going into the music store. I saw that album and I had to have it. A few weeks prior I heard Jesus Walks for the first time and that’s when I became a fan. So when I got home and opened up the case, I was like “Oh this is cool!” It had the lyrics, the yearbook pictures with the superlatives. Still one of my favorites of all time.

Who inspires you–both musically and off the mic? I’m inspired by a lot of people, but off the top of my head, I’d have to say Kanye of course, Jay-z, J Cole, Kendrick, J Cole, Drake. I can go on and on. Every time one of those guys put out new music, I just want to work on my own music. I can relate to so much they rap about. But the people who inspire me in general would have to be my friends; the ones who really support me. When I start doubting myself, they reassure me that I actually have the talent and I can actually make the music thing a reality.

What are your short term career goals and longer term career goals? My short-term career goal, believe it or not, is to become a popular rapper/musician. I don’t really see rap as a long-term goal. I just really love rapping and making good music so I want to establish myself in the music industry first. I want to be on the music scene for at least 10 years. After that, or during that time period, I want to get involved in sports, preferably basketball. Maybe having my own sports talk show on the radio or something like that. Eventually I want to be less involved in the entertainment industry and move into more important things such as human/civil rights. By then, my name and face should be well known and my voice will have a lot more impact.

How would you describe the sound of your music? What do you want your music to sound like? It’s kind of difficult describing my sound. I don’t really think I have one to be honest. At this stage, I’m still writing to the instrumentals that I hear or make and instantly inspire me. If the beat is more aggressive, then I try to tap into that side of me. If it’s more smooth and calm, then I become smooth and calm. I guess I just try to adapt to whatever I hear and create something out of it.

Would you compare yourself to anyone musically? Well I guess it’s no surprise but I would compare myself to Kanye when he was younger. Those College Dropout & Late Registration days. But if we exclude Ye, I would say J Cole. He makes music that people my age hear and say “Yoo J Cole knows!” I felt like there was a point when he was rapping about everything I went through in high school. Then he was rapping about everything I went through in college. It’s like he was living my life. And that’s exactly how I like to make people feel when they hear my verses.

What led you to wanting to rap? I can’t really remember what led me to rap, but I guess it was poetry. In like the 4th grade, I was writing poems in class and my teacher loved them. There was a kid at my school. His name was Dominique. I remember at the time, he was rapping and he had music videos on BET and he was starring in movies. I was amazed I guess because I was like “WTF? You’re my age and you’re making songs and music videos and movies.” So I guess that’s where it stemmed from because if I could write poetry, I think I could rap.

How old were you when you started rapping? I think I wrote my first rap in the 5th grade. I was 10 years old. It was something wack as hell like: “My name is Levar Dest… Yes, I am the best. I write rhymes like I’m taking a test!” Haha I can’t remember all of it, but the rest was history.