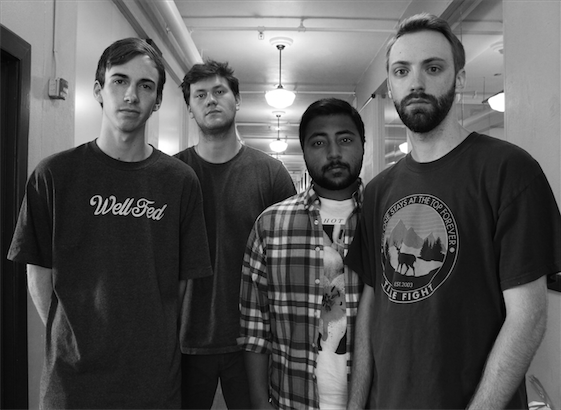 5
SHARES
FacebookTwitter
Alternative Post-Rock band Waypoint has announced plans to release a new EP titledCreature of Habit on November 18th via Seattle based independent label Spartan Records. The band has also launched a pre-order for a limited edition 10” vinyl edition of the record today, which is available now at http://spr.tn/creatureofhabit.
Hailing from the Jackson, MS, Waypoint is a four-piece band made up of Justin Moreira (vocals/guitar), Cody Bass (drums), Travis Bass (guitar) and Salar Almakky (bass). The band got their start in 2009 and soon after released their debut record Good and Well, which helped them as one of most progressive and experimental post-rock bands in the south. After releasing a follow-up EP,Hollow Ground, in 2012 the band gained a national following through tours with the likes of As Cities Burn and Sainthood Reps among others.
Fast forward to 2014, Waypoint has returned with a groundbreaking EP, Creature of Habit, which explores the farthest reaches of their sound. Inspired by the noisemakers of the late 90’s and early 00’s (Deftones, Foo Fighters, Tool), musically, Moreira describes as “heavy, dark, pretty, atmospheric, noisy, dynamic, and above all…unique.” When asked about the sonic intentions of the record, the band simply stated that they “wanted each instrument, note, and word to speak.” In a single listen it is abundantly clear that this mission has been accomplished. Creature of Habit is a complete work. A single narrative unified on all fronts by an ear-crushing musical backbone.
“We wanted to make something that we were proud of — something we could look back on and say, ‘we did the best we could,’” say brothers Cody (drums) and Travis Bass (guitar). “In terms of the tone of the EP, [the darkness] is something that we have always been attracted to,” Moreira adds. “We are not depressed or overly emotional people, but we understand the realities of dark times. When life delivers dark moments, it often helps to cling to that feeling for a little while in order to empathize within that moment — until you finally escape it. We hope that Creature of Habit can do that for people.”
With Creature of Habit, Waypoint has further established their own unique style within their scene and joins the ranks of credible bands like O’Brother, ††† (Crosses) and Palms as the torch bearers for a new wave of ambient, dark post-rock bliss.
Follow the band at https://www.facebook.com/waypointms for additional updates.

Stephen Vicino is the founder of MusicExistence.com. He created this site to give talented musicians a voice and a way to be discovered.
@@svicino
Previous The Amsterdam Red Light District Release “Time Flies” Video | “Gone For A While” Set to Release Nov 26
Next Big Steve Gee Releases “Nikki” and “2086 The Dirty Dance Machine Dedicated To Carl Cox”