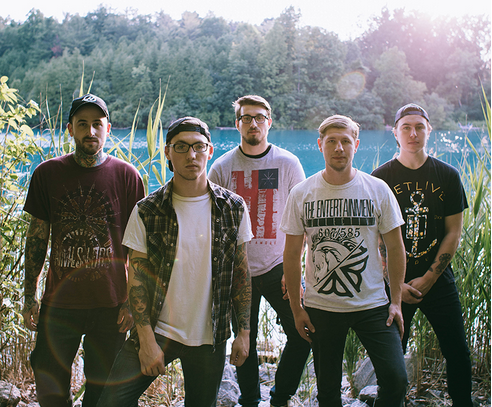 Seattle based independent label Spartan Records is proud to welcome Syracuse rock band Trespassers to the company’s growing roster. In conjunction with the signing announcement, the label has released the band’s EP, No Turning Back, today. It’s currently available for purchase at iTunes and directly from Spartan at http://spr.tn/ntrngbck.

Originally conceived in 2012, Trespassers is a five-piece alternative punk band that began as an idea that finally came to fruition the following year when bandmates Matt Wojtanik (vocals), Matt Travers (guitarist), Tim Hall (guitar), Nick Hotaling (bass) and Alec LaBounty (drums) fell into synch with each other.

Earlier this year Trespassers self-released their first EP, No Turning Back, which the band co-produced with Steve Sopchak. Musically speaking, the record is melodic, emotional and heavy. The gravity of the heavy moments is reinforced by the subtleness of the melodies, and the vulnerability in the songwriting is powerfully framed by confidence in the tones, musicianship, and arrangements. Through painstaking hours of DIY production, months of live rehearsals, and calculated collaboration with influential producers and engineers, Trespassers managed not only to circumvent all the trappings of “the generic” — they were able to reach a synthesis of both inputs and outputs that was unmistakably “them.”

“We wanted these songs to hit heavier than anything we’d ever written,” says Travers.  “Once the music began to take shape, we knew that thematically the EP was going to need to go in a pretty serious and emotional direction.”

Thematically, No Turning Back is a collection of songs about transformation.  The process of writing lyrics for tracks like the band’s current single “Reveal” was in many ways a purging.

“We write what we feel and sometimes that involves wearing your heart on your sleeve and uncovering dark feelings,” adds Hall.  “No Turning Back centers on those choices that continue to blind you from ugly truths; the ones that everyone in your life sees and tries to help you with, but you fail to listen.  You keep falling back on what you are used to until finally you realize that something needs to change.”

Trespassers were eventually introduced to Spartan Records founder John Frazier in 2014 by mutual friend Michael Roe from Daisyhead, and in a short time had inked a deal with the label.

“Our relationship has only just begun,” says Travers. “But working with John, the excitement level that both him and us had right from the start up to striking a deal is insane…we knew his passion was for the music and where we were coming from, and the foresight that we are in this together to make the band a success.  We can tell he truly believes in Spartan Records and his roster.”

“We couldn’t be more excited to welcome Trespassers into the Spartan Family,” Frazier adds.  “We felt an instant connection to the music and band and believe in them wholeheartedly.  The band has stated that they ‘want the music to be there for people when they need it’ and we are committed to making that happen.  It will be an exciting year for Trespassers; please check the Spartan sites frequently for news and updates — the metamorphosis is about to begin.”

Trespassers’ re-release of No Turning Back with Spartan Records is only the beginning. The band has plans for a follow-up EP in early 2015 and looks forward to extensive touring in the new year.

Stephen Vicino is the founder of MusicExistence.com. He created this site to give talented musicians a voice and a way to be discovered.
@@svicino
Previous People on Vacation to Release New Record “The Chronicles of Time Powers”!
Next “A Johnnysmith Christmas” EP Set to Release November 10th