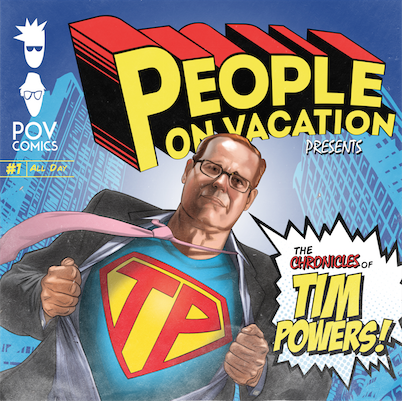 People on Vacation to Release New Record “The Chronicles of Time Powers”!

Texas based power-pop-rock super-duo People On Vacation has announced they will be releasing their upcoming full-length album, The Chronicles of Tim Powers, on December 9th. Today, the band has debuted a new video for their song “You May Not Believe In God.” The new record can be pre-ordered now at http://wearepeopleonvacation.com/.

People on Vacation, which consists of Jaret Reddick of Bowling For Soup and Ryan Hamilton of Smile Smile, will be releasing their new record through Que-So Records/Brando Records with the help from fans via a PledgeMusic campaign.

People On Vacation came about in 2010 after Smile Smile opened for Bowling For Soup and Reddick and Hamilton began jamming together. The two hit it off immediately and before long they’d written their first record, The Carry On EP, which was eventually released in 2011. After shows in the US and UK, the band returned to the studio and released a follow up full-length album, The Summer and the Fall, later the following year.

In early 2014, Reddick and Hamilton called on their fans to help fund the recording of sophomore album, The Chronicles of Tim Powers, through a PledgeMusic campaign with 5% of money raised going to SPCA of Texas. In an unique twist, the band also offered fans the opportunity to name the record via the campaign and loyal supporter named Tim Powers accepted the challenge. After recording wrapped the dynamic duo walked away from the studio with eleven infectious power-pop anthems that will undoubtedly rock the faces of fans around the world.

From the highly entertaining “Don’t Ask The Question” through the reflective “We Shoulda Made It” to the emotional “The Girl I Used To Love” and the heartbreaking album closer “Journey To The End”, The Chronicles Of Tim Powers is packed full of songs for every mood, all the while delivered in People On Vacation’s unique uplifting style.

The band will be kicking off their “People On Vacation Saves The World” UK Tour in December and are expected to perform in the U.S. soon.

Follow the band at https://www.facebook.com/PeopleOnVacation for additional news and updates.

Tags People on Vacation The Chronicles of Time Powers

Stephen Vicino is the founder of MusicExistence.com. He created this site to give talented musicians a voice and a way to be discovered.
@@svicino
Previous John Blake – Your Light (Let It Shine) [Official Music Video] ft. Elisa Polanco
Next Stream Trespassers New EP ‘No Turning Back’ Now!