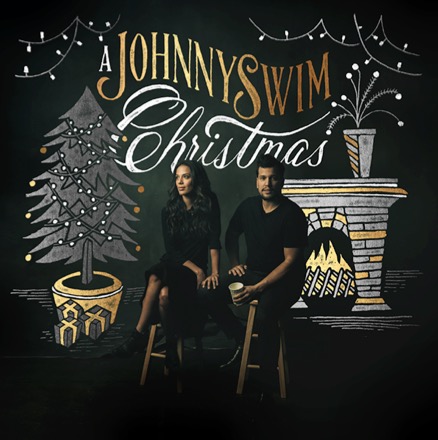 Celebrate the holidays with JOHNNYSWIM! The husband-and-wife team’s A JOHNNYSWIM Christmas EP will be digitally released onNovember 10 via Big Picnic Records just in time for early shopping lists. The EP was produced by JOHNNYSWIM’s Abner Ramirez and will feature five holiday classics (including one live, acoustic recording) and one original tune. See below for full track listing.

To celebrate, the duo will kick off the “A JOHNNYSWIM Christmas Tour” this December, including three nights in Nashville (two of which are sold out), and two nights in Chicago and New York City. JOHNNYSWIM have been touring non-stop since the release of their debut full-lengthDiamonds including stops at New Orleans Jazz Fest, Firefly Festival, Forecastle Festival, Lollapalooza, and Hardly Strictly Bluegrass. Of their live show, Entertainment Weekly hails they’re “a roaring good time…As lovely as they are talented,” while Billboard adds, “We fell in love with them musically, personally, everything.”

JOHNNYSWIM, who were selected as the first-ever Vh1 You Oughta Know + artist, continue to receive widespread critical acclaim for Diamonds, which debuted at #1 on iTunes Singer-Songwriter Chart, #10 overall, and top 30 on the Billboard 200 Chart. They were featured on NPR’s “All Things Considered” (http://n.pr/1hKNYzV), played a NPR “Tiny Desk Concert” (http://n.pr/1nXPfsH), performed their single “Home” on “The Late Show with David Letterman” (http://youtu.be/72BiiNXhjRY) as well as Vh1’s “Big Morning Buzz Live” (http://on.vh1.com/1ruJlDQ).

Amanda Sudano-Ramirez and Abner make up JOHNNYSWIM. Amanda was exposed to music at a young age with musicians as parents, while Abner studied music at Douglas Anderson School of the Arts in his native Jacksonville, Florida. The two met in 2006 and started collaborating musically after discovering their similar influences of folk, soul and rock. Since then, they’ve relocated to Los Angeles, released two critically lauded EPs and performed on “The Tonight Show with Jay Leno,” “The Late Late Show with Craig Ferguson,” “Live from Daryl’s House” and “Today Show.” The duo has toured extensively including stops at SXSW, Spoleto Festival, Bonnaroo and a support slots for Emeli Sandé, Aloe Blacc and Feist.

Stephen Vicino is the founder of MusicExistence.com. He created this site to give talented musicians a voice and a way to be discovered.
@@svicino
Previous Stream Trespassers New EP ‘No Turning Back’ Now!
Next Bring me the Horizon premier Don’t Look Down