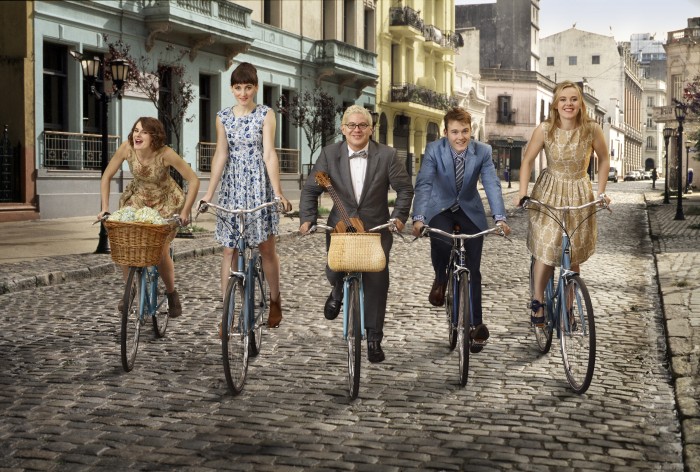 11
SHARES
FacebookTwitter
The official music video for Pink Martini and The von Trapps’ rendition of “Dream A Little Dream” premiered yesterday. Melanie von Trapp helped direct the piece with Alex Marashian, co-producer of the 2009 Pink Martini album Splendor in the Grass. Eric Edwards, best known for his work with Gus van Sant, joined team as Director of Photography, along with producers Tanya Selvaratnam and Portlandia‘s David Cress. When asked about the genesis of the story, Marashian comments, “Tortoises are really known to go for it when they mate. The modern world has made it more and more difficult for tortoises to get together. Looking at the geography of the garden, Bella Madrona, the idea emerged of putting a tortoise on one side with the mission to get to the other side over the course of a day, and the result would be some sort of a tortoise reunion.”
“Dream A Little Dream” is the title track of Pink Martini and The von Trapps’ new collaborative album, which was released earlier this year to widespread acclaim. In addition to featuring Sofia, Melanie, Amanda and August von Trapp—the actual great-grandchildren of Captain and Maria von Trapp—the album also includes special guests Wayne Newton, Jack Hanna, The Chieftains and Charmian Carr (the original Liesl in the film version of The Sound of Music). Listen to a recent interview from NPR’s Weekend Edition Saturday with The von Trapps, bandleader Thomas Lauderdale, lead singer China Forbes and host Scott Simon here.
Pink Martini will continue their sold-out worldwide tour this fall and winter, including two special New Year’s Eve performances at Los Angeles’ Walt Disney Concert Hall. See below for complete tour information.
2014 has been a seminal year within the world of Pink Martini. Now celebrating 20 years as a musical collective, the globally acclaimed “little orchestra” was recently inducted into the Hollywood Bowl Hall of Fame and, just earlier this month, were inducted into the Oregon Music Hall of Fame. Moreover, Lauderdale was recently honored with an “Oregon History Makers” award presented by the Oregon Historical Society.
Lauderdale—a Harvard graduate and classically trained pianist—founded Pink Martini in 1994 to play political fundraisers for progressive causes such as civil rights, affordable housing and public broadcasting. In the years since, the band’s albums have collectively sold over three million copies worldwide, all on the bands’ own label, Heinz Records.
In addition to Dream A Little Dream, Pink Martini recently released their first ever 7” vinyl single as a pay-what-you-want sale. The single includes the A-side “Zundoko-bushi,” which was featured on the band’s acclaimed 2013 album Get Happy, along with a previously unreleased instrumental B-side, “Foxy Strut” (named after singer China Forbes’ dog Foxy). For the release, the band and their label, Heinz Records, have partnered with another Portland, OR-based company, Generous. Each purchase on the e-commerce platform benefits charity and allows fans to pay-what-they-want. In addition to the 7”, the Pink Martini Generous store will include the digital songs, a new Pink Martini T-shirt as well as signed copies of Get Happy. Visit the store here.

Stephen Vicino is the founder of MusicExistence.com. He created this site to give talented musicians a voice and a way to be discovered.
@@svicino
Previous Album Review: Logic — Under Pressure
Next TYPEFIGHTER Stream Debut LP “The End of Everything”