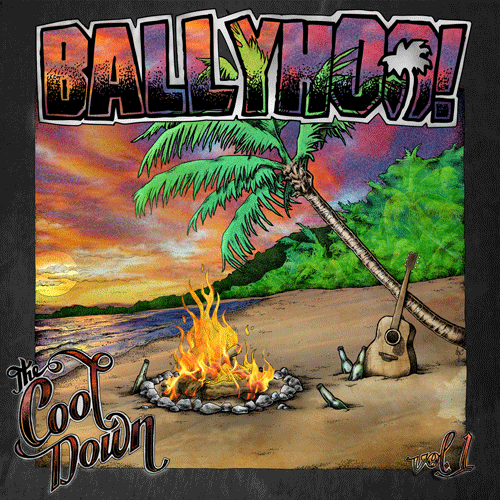 The reggae/rock band Ballyhoo! has released their newest EP “The Cool Down: Vol 1,” today via Right Coast Records! Recorded, mixed, and mastered by Mike Stebe in Orlando, FL, the EP features three new tracks, as well as three variations on older ones. Download “The Cool Down: Vol 1” now on iTunes, here: http://bit.ly/bhoocooldown1. Ballyhoo! is currently on tour with Tribal Seeds as a part of the fall Representing Tour, also featuring Gonzo with Beyond I Sight. For more information on the EP and all upcoming tour dates, please visit www.ballyhoorocks.com.

On “The Cool Down: Vol 1,” lead singer Howi Spangler explains, “With ‘The Cool Down,’ we wanted to bring back that laid back vibe we had in our pre-‘Daydreams’ releases. It turned out to be even more chill than we went for and we love it. I had written some songs that were different than our current sound and then we also thought it would be cool to take a few old favorites and bring them to that level. ‘Evil Penguin (Frontline)’ really sounds epic in this new way. The message from this EP as a whole, even down to the artwork, is to take the listener to a happy place after that long work day or whatever stressful situation they’re in. Just to ‘cool down’ and have a beer by our sonic beach.”

Ballyhoo! recently announced the 4th and final installment of “Take It Easy” as part of their Songshare program with the New York Rock Exchange. Purchasers will receive an alternate version of Ballyhoo!’s song “Take it Easy” accompanied by a silver or gold certificate and a royalty check made out to you. As a special offer, NYRE has offered to give anyone who buys the “Take it Easy” Songshare a copy of the band’s new EP “The Cool Down: Vol 1” for free! For more information, please visit: http://ballyhoo.newyorkrockexchange.com.

This past summer Ballyhoo! released their three-track EP Halo, which featured the band’s cover of Bruno Mars’ “The Lazy Song” and served as a follow-up to Ballyhoo!’s 5th studio album Pineapple Grenade. The band independently released the album on their own record label, Right Coast Records, in the summer of 2013 and broke through the Billboard Top 200 at #189 as well as reaching #4 Billboard Heatseekers and #5 at iTunes Alternative charts.

Pineapple Grenade features the single “No Good,” produced by Rome Ramirez (Sublime with Rome) and mixed by Paul Leary (U2, Sublime). The band followed up the single release with a sultry video premiere on FUSE.tv. The video was directed by Wes “Wuz Good” Armstrong (B.o.B, T-Pain, Flo Rida).

The first single “Run” saw an early radio add from KRAB Bakersfield and early radio spins by KROQ Los Angeles, WHFS Baltimore, KTCL Denver, and KCXX Riverside among others. Alongside the album release, BALLYHOO! co-headlined the 2013 Summer Sickness Tour with Authority Zero. Pineapple Grenade is the band’s follow-up to the 2011 LAW Records release of “Daydreams,” which debuted at #1 on the iTunes Reggae Charts and #4 on Amazon.

Between the road and the studio, BALLYHOO! have crafted a sound distinctly their own; fresh, fun, and embodied by the soul of the party lifestyle. Lead singer and guitarist, Howi Spangler, has a reputation for mixing slick lyrics with his smooth but powerful voice. Drummer Donald Spangler lays out the hard-hitting beats. Scott Vandrey layers in the finishing touches to the band’s signature sound on keys. The band recently welcomed Nick Lucera as their new bass player.

Ballyhoo!’s new EP The Cool Down is now on iTunes, here: http://bit.ly/bhoocooldown1.

Stephen Vicino is the founder of MusicExistence.com. He created this site to give talented musicians a voice and a way to be discovered.
@@svicino
Previous AUGUST BURNS RED ANNOUNCES 2015 US HEADLINE TOUR
Next Cold War Kids – Hold My Home