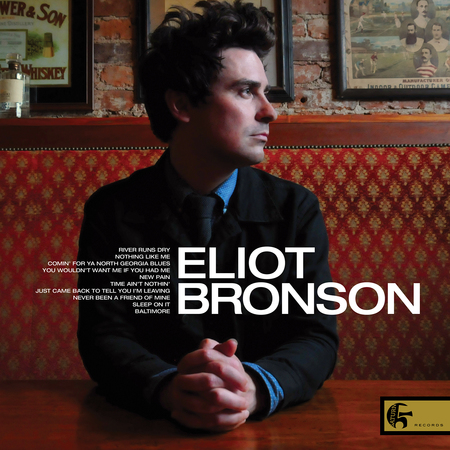 Atlanta-based songwriter Eliot Bronson will release his self-titled album via Saturn 5 Records. An exclusive stream of the album is available below, site a acoustic video of the “rollicking eye opener” is available above!”

Eliot Bronson is now available for pre-order with an instant download of the track “New Pain” that was recently featured in Paste Magazine. A limited edition vinyl pre-order and CD pre-order are available from the Saturn 5 Store.

For his upcoming album, Bronson enlisted the help of producer Dave Cobb, who recently won producer credit for Jason Isbell’s Album of the Year award at the Americana Music Awards. Cobb has also helmed recent releases by Sturgill Simpson, Rival Sons, and Nikki Lane. “I was stunned when I got a response. It was really validating for me because I sort of had him on a pedestal,” says Bronson about the cold email he sent to Cobb to produce the record.

“It was quite a pleasure workin’ with Eliot,” says Cobb. “He’s a brilliant lyricist and poet. We did the record live all together and the album feels timeless.”

Stephen Vicino is the founder of MusicExistence.com. He created this site to give talented musicians a voice and a way to be discovered.
@@svicino
Previous NIKOS Stream Self-Titled EP In Full
Next BOSTON ROCK BAND SOMOS JOINS NO SLEEP RECORDS