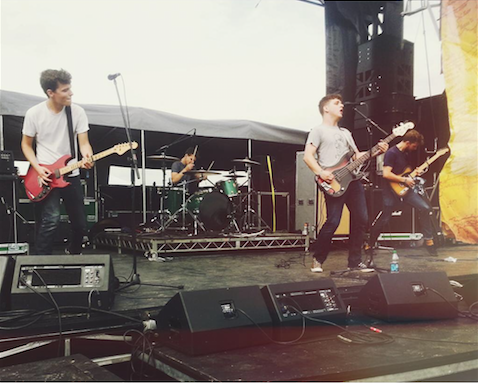 Huntington Beach based No Sleep Records is proud to welcome rising Boston based rock band Somos to the label’s growing family.  The band joins an eclectic roster that includes acts like Balance and Composure, Major League, Xerxes, Allison Weiss and more! Fans can expect a new split EP and full length record via No Sleep in 2015.

“We’re so excited to end 2014 joining the family over at No Sleep Records,” says guitarist Phil Haggerty.  “We’ve all been fans of the label for some time and as individuals we have been influenced by a number of their releases. Not only do we think the label is a good fit for us currently, but moving forward with our writing we feel we’ll have some fresh content to bring to the table as we continue to challenge ourselves musically. Expect a short release in early 2015 and full-length number two later on in the year.”

“We are beyond excited to welcome Somos to the family at No Sleep Records,” adds No Sleep president Chris Hansen. “Since first hearing their Temple of Plenty record out earlier this year via Tiny Engines we all became HUGE fans of theirs. Look for a split from the guys early next year and an amazing follow up full length later in the year. BIG things to come from these guys.”

After a few years building a solid audience in New England, Somos finally arrived on the scene with their debut album Temple of Plenty in early 2014. Described by Pitchfork “as no-frills and trend-averse as it gets,” the band immediately gained attention for their unique infusion of jangly indie-rock guitars, driving punk rock rhythm and vulnerable lyrics. Since the release the band’s following has grown immensely with anticipation building towards their next release.

Somos will be touring this fall with Modern Baseball. Follow the band at https://www.facebook.com/somosMA for additional news and updates.

Stephen Vicino is the founder of MusicExistence.com. He created this site to give talented musicians a voice and a way to be discovered.
@@svicino
Previous Eliot Bronson Premieres Self-Titled LP with Acoustic Guitar Magazine
Next We The Machine Unleash a “Tempest”, New Single/Video From Seasons EP