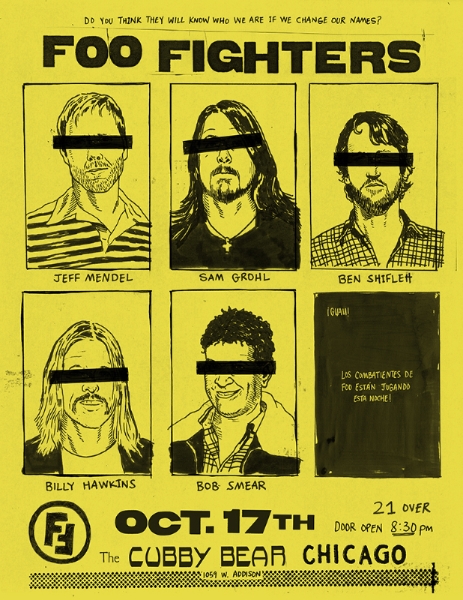 he highly anticipated new HBO series Foo Fighters: Sonic Highways debuts on Friday, October 17 at 11:00pm (EST). In celebration of the premiere, HBO will collaborate with Facebook to present “Foo Fighters Sonic Highways: Live from The Cubby Bear,” a live stream of the Foo Fighters premiere party concert, which will be made available to fans in the U.S. on the HBO Facebook page: https://www.facebook.com/hbo.

Dave Grohl, Taylor Hawkins, Nate Mendel, Chris Shiflett and Pat Smear will take the stage at Chicago’s The Cubby Bear at midnight (EST) on Friday, October 17 immediately following a screening of the premiere episode. The show will feature the first ever in-concert performance of the new single “Something from Nothing” from the band’s forthcoming album, also titled Sonic Highways (out November 10 on Roswell/RCA).

The premiere episode takes place in Chicago and prominently features The Cubby Bear, a small club with huge personal significance to Grohl, who saw his first punk rock show at the venue – an event that set him on his life’s path.

Fans located in Chicago can attend the concert by purchasing tickets online at http://itsh.bo/FFChicago beginning Wednesday, October 15 at 10:00am (CST). A two-ticket limit per customer will be strictly enforced and attendees must be 21+. All tickets will be held at will-call and are non-transferable. Ticket holders and their guests must check in at the same time, present government-issued photo ID and immediately enter the venue. Doors open at 8:30pm (CST).

For fans who won’t have the opportunity to attend or catch the live stream of the concert, an archived version of the event will be made available on certain HBO platforms at a later date.

Stephen Vicino is the founder of MusicExistence.com. He created this site to give talented musicians a voice and a way to be discovered.
@@svicino
Previous Bad Pollyanna & Sophie Lancaster Foundation Launch ‘Invincible Girl’ Marking 7th Anniversary Of Tragic Murder
Next The Written Years – The Self-Titled Debut Album Out November 10th 2014