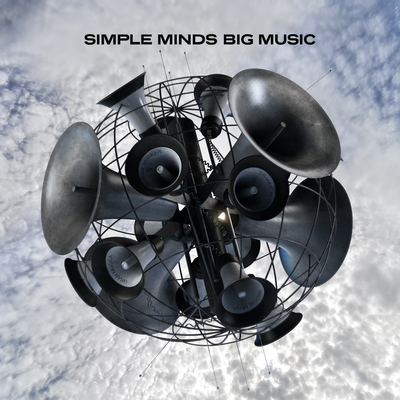 On November 3rd, the veteran Scottish alternative rock band Simple Minds will return with Big Music, their first album of new material in 5 years. Three-and-a-half decades since their first real landmark album – 1980’s thrilling, impressionistic Empires And Dance – the Glasgow quintet, with frontman Jim Kerr and guitarist Charlie Burchill at their creative core, are rekindling the energy and attitude that made them one of the greatest bands of that era.

Big Music, their 16th album was made with an array of collaborators old and new – including co-writer Iain Cook (of Glasgow band Chvrches) and producers Steve Osborne, Andy Wright and Steve Hillage (who worked on 1981’s Sons And Fascination / Sister Feelings Call).

“Our songs have always been a snapshot of a moment in time and Big Music is no exception,” says Jim Kerr. “But there are also elements of nostalgia in that a lot of the themes are the same ones that fuelled us on Empires And Dance and Sons And Fascination. We are still writing songs about great cities and the movement of people. It seems that the more things change, the more they stay the same.”

The most touching moment on Big Music arrives with the haunting “Honest Town,” a track inspired by fond memories of Jim’s mum, who passed away in Glasgow four years ago. Co-written with Iain Cook, it is a dream-like travelogue through Kerr’s childhood stomping grounds on Glasgow’s South Side. “Shortly before my mum died, I took her out for a drive,’ says the singer. ‘It was just before Christmas, and she wanted to go into the city centre to buy some new clothes, even though she was already very ill. The route we took became a journey through the past, as we drove past our old housing scheme, my old school and the factory my mum used to work in. She was talking all the time, and one phrase stuck in my mind: “This is an honest town”. She died not that long afterwards, but it was a lovely way of saying farewell.”

Big Music features another homage of sorts, with the arena-sized anthem “Let The Day Begin” a fitting tribute to American singer and guitarist Michael Been, who died after suffering a heart attack in 2010. Been was the frontman of Oklahoman band The Call, who toured with Simple Minds in the 1980s, and “Let The Day Begin” was their signature tune. One of the forgotten anthems of the 1980s, it was revived in 2000 when America’s Democratic presidential candidate Al Gore adopted it as his official campaign song.

“The Call were a great band,” recalls Kerr. “They listened to the John Peel Show every night and wanted to sound like Joy Division. But they came from Oklahoma and couldn’t stop themselves from sounding like The Band.”

On Big Music, Simple Minds does justice to their legacy, producing an album that deserves to be mentioned in the same breath as Empires And Dance, New Gold Dream and Sparkle In The Rain. They might have been away from the catwalk, but Simple Minds are now fully back where they belong.

Stephen Vicino is the founder of MusicExistence.com. He created this site to give talented musicians a voice and a way to be discovered.
@@svicino
Previous TEXAS IN JULY ANNOUNCES HOLIDAY SHOWS WITH VANNA
Next When All Else Fails’ New Video/Single “Agree to Disagree” Wins War for Your Heart