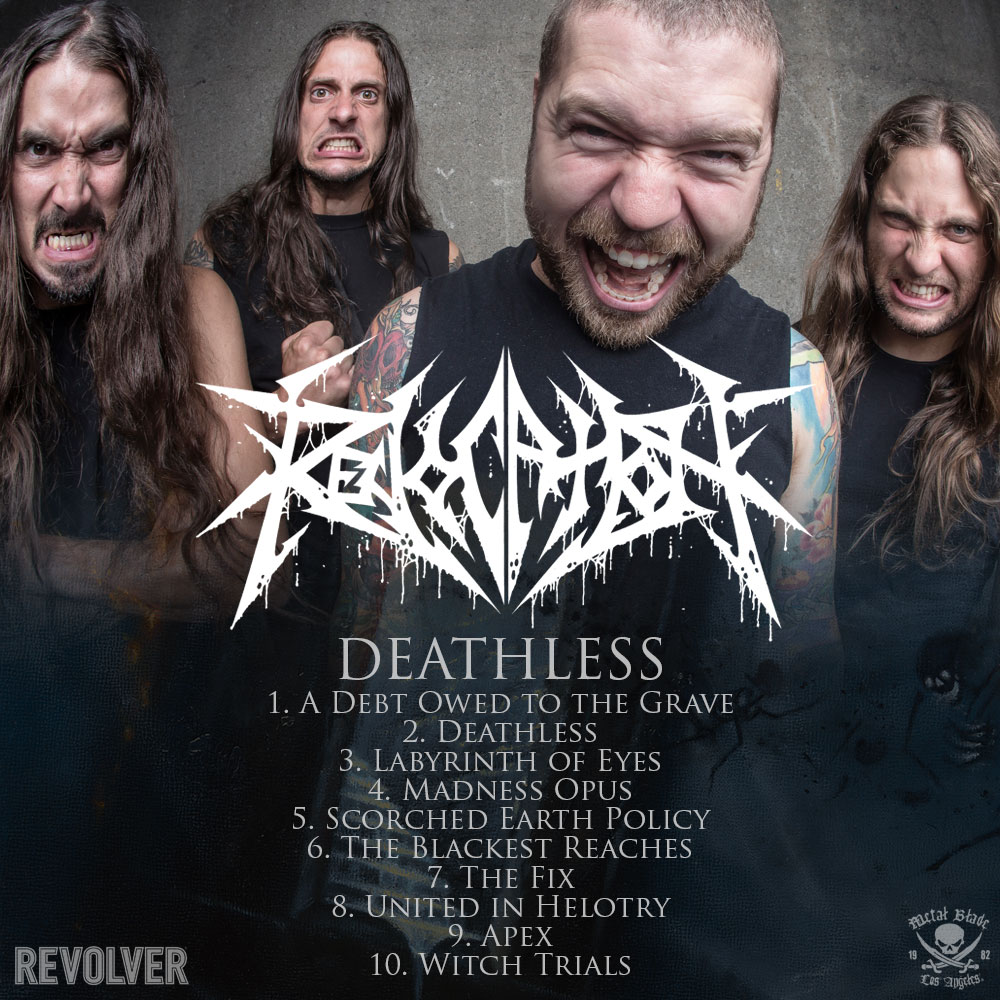 REVOCATION Streaming “Deathless” in its Entirety on Music Existence

REVOCATION ‘s brand new album, “Deathless,” is ready to be unveiled! Fans can stream the ENTIRE album now below. The album will be available everywhere worldwide via Metal Blade Records as of Tuesday, October 14th. Fans in Europe can order at EMP.de, fans in the UK can order at omerch, fans in Australia can order at nervegas.com, and fans in North America can order at indiemerch, as well as the band’s official store at merchnow. Fans worldwide can also download the album via iTunes!

REVOCATION have spent the last eight years converting fans to their cause with four full length albums, an EP with Scion AV, and a charismatic live show led by guitarist/vocalist Dave Davidson. The Boston-based band also features the staggeringly talented lineup of: Dan Gargiulo on guitar, Brett Bamberger on bass, and Phil Dubois on drums. REVOCATION has firmly been established as one of the genre’s finest and will continue their campaign as part of the Metal Blade Records roster. Their fifth album, “Deathless,” is a fitting debut for the label, and a definitive statement of intent from the band.  The artwork for “Deathless” was hand painted by internationally recognized tattoo artist Tom Strom. An in-depth feature on the process of creating the artwork can be seen on Metal Sucks HERE.

During the recording process, the band shot a series of videos documenting their work on “Deathless“. All three episodes can be seen now at metalblade.com/revocation.

“Deathless” was recorded with acclaimed producer Zeuss at Planet Z studios in Massachusetts. The album is ten tracks of ambitious, catchy, and undeniably heavy material. Musically, cuts like “Madness Opus” showcase a more deliberate REVOCATION – restrained, if even moderately so, to deliver a slow, near-dirge like track. Alternatively, the title track highlights the diversity of Davidson’s vocals with a catchy chorus. It’s an earworm the likes of which the band had only previously hinted. The rest of the album offers a refreshing variety of music and truly feels like an “album”, rather than a collection of similar tracks. This is a refinement, achieved only through years of focusing on their craft.

REVOCATION are touring in support of “Deathless” now with Crowbar in North America the tour stops tonight in Dallas, TX and is set to run through October 10th in Houston, TX.  This tour will be followed by a full European tour with new label mates Cannibal Corpse and Aeon.  Following the European dates REVOCATION will head to China for a run of dates, followed by a trip down under to Australia for a string of shows.

Stephen Vicino is the founder of MusicExistence.com. He created this site to give talented musicians a voice and a way to be discovered.
@@svicino
Previous Stream DJ Fanatic’s Travel Kit: Runway Edition
Next TEXAS IN JULY ANNOUNCES HOLIDAY SHOWS WITH VANNA