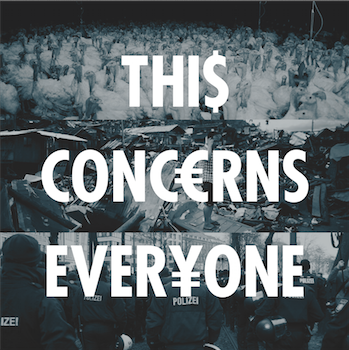 Pittsburgh based independent label A-F Records and Rise Against’s vocalist Tim Mcllrath have teamed up to premiere a cover of Guns N’ Roses’ classic single “Civil War”.  The cover is featured on A-F Records’ upcoming protest compilation, This Concerns Everyone, which is due out on November 18th. Fans can pre-order the record now here.

This Concerns Everyone is a compilation featuring protest music, originals and covers, from outspoken musicians like Mcllrath, Tom Morello (The Nightwatchman, Rage Against The Machine), Chris Wollard (Hot Water Music) and Chris #2 (Anti-Flag) among others.

“Music is at its most compelling and powerful when used as a vehicle for change.” – Tim McIlrath

A portion of proceeds from the record’s sales will be donated to the Right To Heal Campaign, which is a joint effort between The Iraq Veterans Against The War, Organization of Women’s Freedom In Iraq and the Federation of Workers Councils and Unions In Iraq. Learn more here: www.righttoheal.org.

Stephen Vicino is the founder of MusicExistence.com. He created this site to give talented musicians a voice and a way to be discovered.
@@svicino
Previous WEST VIRGINIA EXTREME METAL ACT COGNITION PREPARE TO UNLEASH DEBUT FULL-LENGTH ALBUM
Next KENNY FAME RELEASES “A DIFFERENT DAY” REMIX