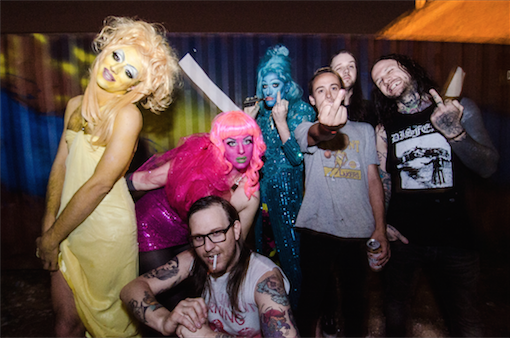 Hardcore punk band Old Lines is streaming a new song called “Paint Them Gold”. The track is featured on their upcoming record No Child Left Behind, which is due out on October 14th. Fans can pre-order the album now at https://nosleeprecords.com/product/7340.

“Paint Them Gold” is about how large corporations manipulate people into accepting a quick buck or a short term fix while ignoring the big picture,” says vocalist Matt Taylor. “Energy companies are buying up farmland all over the country to start fracking operations, and doing so by taking advantage of struggling families with empty promises of fixing their financial situation. Inevitably, Capitalism will always win and the farmers will lose more and more until they are left with nothing. This song is a plea for all of us to start considering the damage that will come from looking for an easy way out, and a battle cry to end the  cooperation with those who would sooner destroy our earth than help anything that lives on it.”

Stephen Vicino is the founder of MusicExistence.com. He created this site to give talented musicians a voice and a way to be discovered.
@@svicino
Previous ERIC DASH ON TOUR NOW WITH THE JANOSKIANS | Win Tickets!
Next New Politics Kicking Off “Everywhere I Go” Fall Tour