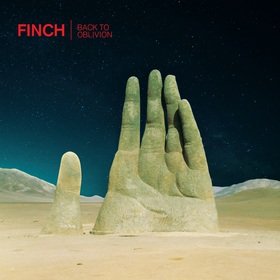 The new studio album from Finch, Back To Oblivion, is now streaming this week in its entirety.
Back To Oblivion will be released next week on September 30th via Razor & Tie. The album was produced by Brian Virtue (Deftones, 30 Seconds to Mars, Janes Addiction, Audio Slave).

Back To Oblivion is available for pre-order now at iTunes HERE or Amazon HERE.  Merch pre-order bundles are also available here finch.merchnow.com.

On Friday, September 26th the band will be doing a Reddit chat on /R/Music at 1:00PM EST. Fans can chat here http://www.reddit.com/r/Music/.

Finch will be heading out this Fall on their headlining tour with support from Maps & Atlases, Wounds and Helen Earth Band. The tour kicks off on September 30th in San Diego, CA (tour dates below). Tickets can be purchased here http://soundrink.com/offsite/tour/finch

Back to Oblivion marks the return of Finch with the band’s first full length album in over nine years. The Southern California band has undeniably created a lasting, formidable body of work with their two studio albums and EPs – singer Nate Barcalow acknowledges that 2002’s What It Is To Burn all but “defined post-hardcore early in the decade”, while 2005’s Say Hello to Sunshine continued to shape its direction. The band dignified the demand for a celebration of What It Is To Burn’s 10th anniversary by reforming after a hiatus and playing select sold-out shows across the country in 2013. Inspired by the creative surge brought on by these shows, Finch rendered these contradictions moot with Back to Oblivion, their long-awaited third LP and a new, bold chapter in the band’s legacy. Back to Oblivion itself is a paradoxical idea. This is Finch reinvigorated, brimming with the inspiration of their earliest days; the opposite of the negation implied by “oblivion.” But as a songwriting unit, they’re challenging themselves by going deep into the unknown – this is by far Finch’s most introspective and demanding work from a lyrical standpoint.

Stephen Vicino is the founder of MusicExistence.com. He created this site to give talented musicians a voice and a way to be discovered.
@@svicino
Previous Streets of Laredo Announce New Album Volume I & II Out October 27th via Dine Alone Records
Next MOTÖRHEAD Invites Fans to Make Official “Killed By Death” Video