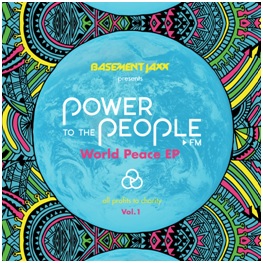 With the release of their seventh studio album JUNTO (Atlantic Jaxx/PIAS America) under their belts, dance music legends BASEMENT JAXX now announce a follow-up musical project which comes in the form of a new and unique EP – POWER TO THE PEOPLE.FM WORLD PEACE EP – which will be released on World Peace Day this Sunday, September 21.

The new EP will be based around popular JUNTO album track “Power To The People” – a positive and empowering song about what people of the world can achieve when they unite and collaborate. Staying truer than ever to the BASEMENT JAXX ethos, the project sees the duo doing something unpredictable and experimental involving a wide range of creative and unlikely people with some amazing stories – from Indian folk groups (Swarathma) to Thai reggae bands (Sticky Rice) via African drummers, hula hoopers, beatboxers, ballet dancers, Korean B Boys and, from Paraguay, The Recycled Orchestra of Cateura.

On their new website www.powertothepeople.fm, “Power To The People” can be freely accessed as Felix and Simon call on musicians, singers, dancers, film-makers and artists from all corners of the globe to create their own interpretations of their song. The aim is for people at home, wherever they are in the world, musical or not, to be able to choose individual elements of the track and make their own colourful mixes.

The EP, which is released online on Sunday, will feature two “mash up” mixes by BASEMENT JAXX using samples from the hundreds of contributions already made to the project, plus five of the best versions of the song that have been submitted from around the world, and can be downloaded HERE

All profits from this release will be donated to charity.

“The song asks us to consider our interconnectedness – it’s about people opening their minds and creating a project that defines the links between different countries. The ideal is to get every language singing some interpretation of the song, in every style of music.” Felix Buxton

“The words of the song are very relevant and I think they sum up an underlying spirit at the moment in the world. Good things can happen and people can make change come about. It’s a serious message, but we want people to have fun.” Simon Ratcliffe

Stephen Vicino is the founder of MusicExistence.com. He created this site to give talented musicians a voice and a way to be discovered.
@@svicino
Previous Discord Curse Releases Episode One of DCTV, Features Snippet of “#Bandwhore”
Next BAND PERFORMANCE TIMES ANNOUNCED FOR LOUDER THAN LIFE OCTOBER 4 & 5 AT CHAMPIONS PARK IN LOUISVILLE, KY