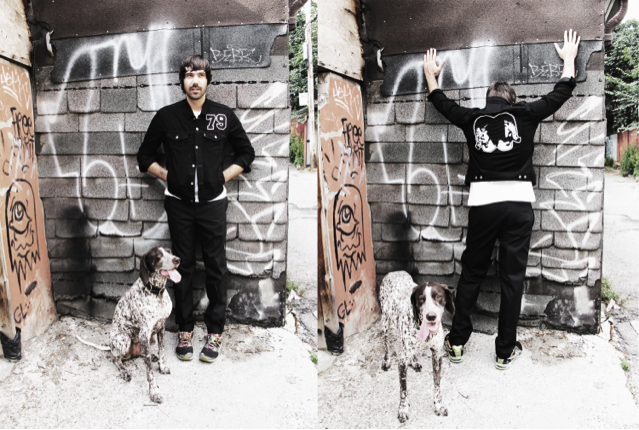 Dance-punk duo Death From Above 1979 have created their own very special and extremely limited-edition DFA 1979 denim jacket. The Levi’s slim-cut black jacket features hand-stitched chenille patches of a “79” on the front and DFA 1979’s distinctive logo on the back, both designed by Klaxon Howl and Wolff.

Only 60 of these jackets will be made and sold to the public. They will be available beginning today, Sept. 18th on the official DFA 1979 Twitter:

In other DFA 1979 news, the track “Crystal Ball,” from the new album, The Physical World, will be one of the songs featured in the soundtrack for FIFA 15 , the upcoming video game from EA Sports on Sep. 23rd. For more information, click here.

The Physical World, the second critically-applauded album from DFA 1979 in a decade, has been immediately embraced around the globe. Recent live shows have been explosive events that have the media raving:

“The energy between the two musicians was off the charts…If you closed your eyes, it was hard to imagine the performance was being handled by only two people.” – Diffusser.FM

DFA 1979 will hit the road this fall in support of The Physical World. They are not to be missed. Need proof? Check out their recent performance of “Trainwreck1979,” from Letterman and view the official video for “Trainwreck 1979” here. Confirmed Tour dates are as follows:

Death From Above 1979 Tour Dates

Stephen Vicino is the founder of MusicExistence.com. He created this site to give talented musicians a voice and a way to be discovered.
@@svicino
Previous Manic Pixi Release Sugar Bomb!
Next Top Mixtape Sites Online That Get Hella Traffic