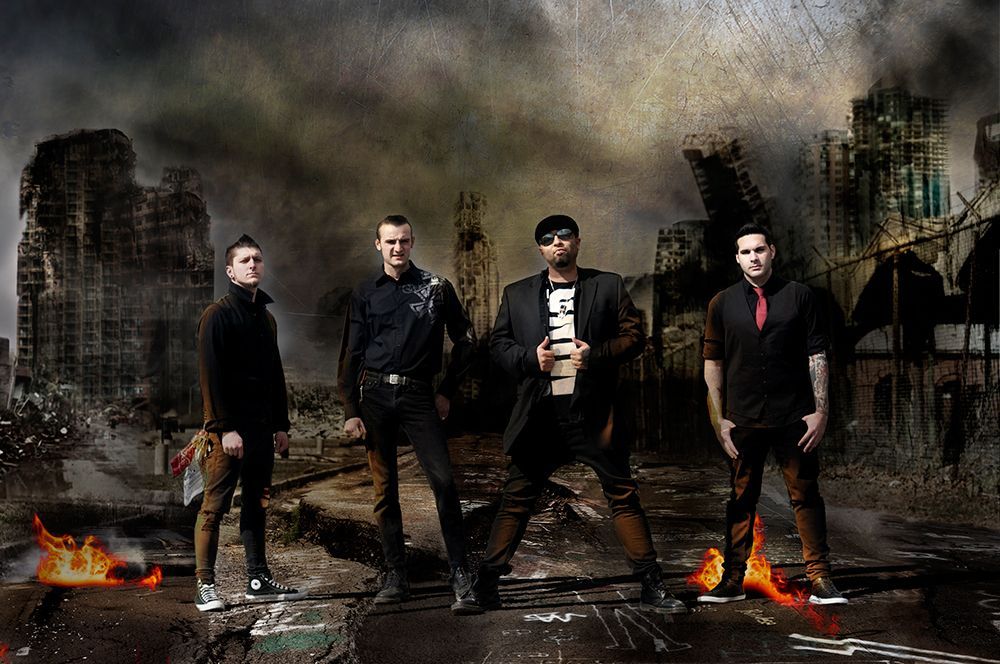 A Midnight Tragedy announce the official release of the video for the first single off their new album Lost Under Infinite Sorrow “Torment”.  The video was released via the band’s youtube channel at www.youtube.com/amidnighttragedy.

“Torment” is the first single off The band’s powerful 17 track concept album.  The video was shot in Kearny NJ and Jamaica NY by director and cinematographer Kirk Farrington of UGCTV.

Check it out below:

About A Midnight Tragedy:

A Midnight Tragedy is a four piece rock band from Kearny, New Jersey formed by vocalist Dallas Sanchez and drummer Dan Mennella in the winter of 2005.  Bassist John Leonti joined the lineup in 2006 and the band went on to release their first self-titled 3 song EP which would take them to the main stage at 2007 The Starland Ballroom Summer Campout Music Festival and the 2007 New Jersey leg of Van’s Warped Tour.  Following a successful tour, AMT parted ways with guitarist and founding member Chris “River” Rivera.  River was then replaced by Ryan Sinisi.

AMT self-released their first full length album, titled Reinventing The End, mastered by Justin Schturtz of Sterling Sound in 2008.  With a hard-hitting sound and melodic sing-along choruses reminiscent of My Chemical Romance and AFI, Reinventing The End received much positive local acclaim.  Over the next two years, AMT went on to perform at Bamboozle, opened up for Good Charlotte and Metro Station at Six Flags Great Adventure summer festival, took the main stage at the Big Giant Extravaganza Rock Festival and headlined a benefit show for Cancer Research in Salem, OH in addition to a self-funded East Coast tour to promote the album.  The band was featured on a number of local college radio stations and local publications and later signed with Brooklyn-based indie record label, Stitched Up Records. As a result, AMT was featured on the label’s Warped Tour Compilation album distributed locally that same year. It was no surprise, then that AMT rose steadily and ranked as one of the top 20 punk rock bands in the world and top 10 NJ bands on MySpace’s music charts in 2009.

In 2010, AMT once again saw some changes in their line-up.  Guitarist Ryan Sinisi left the band and it was then that long-time friend and former member of Dallas and Dan’s earlier band, Esteban Pastor slid seamlessly into their ranks.  Energized by their local and regional success, AMT returned to the studio to record what would become their second full-length self-released album titled I Tried To Make You Immortal, You Tried To Make Me a KILLER, produced by Wil Francis of Aiden and William Control (Victory Records).

After many years together and the recording of their second album, keyboardist and founding member Dave Boyes, left the band with what would be it’s final and current line-up.

I Tried to Make You Immortal, You Tried To Make Me A KILLER created some buzz locally and the band was featured in various local interviews and appeared in the June issue of Alternative Press magazine and Warped Magazine.  AMT co-headlined a show with William Control in Montclair, New Jersey, went on to tour locally and throughout New England in 2012 in support of their new album and performed at a Bamboozle Alumni show at The Stone Pony and closed off the year with a performance at Six Flags Great Adventure Fright Fest in October.

2013 saw A Midnight Tragedy back in the studio for a third full-length album, recorded at Westfall Recording Company in Farmingdale, New York and signed on with indie label and management firm, Rock Ridge Music.  Despite their busy studio schedules, AMT continued to play to small local audiences and a number of high profile gigs throughout the year as an opening band for New Years Day and Otep at the Stanhope House, Vampires Everywhere and Wednesday 13 at The Studio at Webster Hall and The Misfits at the Starland Ballroom.  AMT’s dedication and prominent online presence worldwide earned them a spot on Reverbnation’s Top 40 Rock Charts.  The band was recently a featured artist on penseyeview.com and their lyric video was featured on defendthescene.com