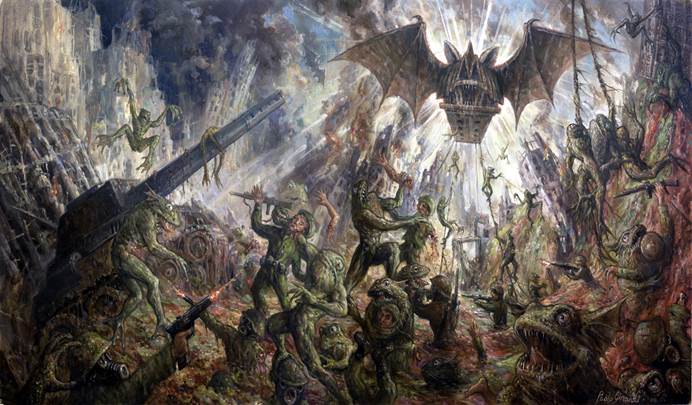 Think back – what did you do with your father when you were a teenager? Perhaps you went on fishing trips, learned how to change the oil in your first car, or even enjoyed a ballgame together from time to time? Such is not the case for impressive 17-year-old drummer Leo “Lurkrot” Didkovsky, who proposed the idea of forming a blackened-grindcore band with his guitarist/composer father, Nick “Vürdoth” Didkovsky, in 2013. With the later addition of fellow 18-year-old family friend and vocalist Malcolm “Skrag the Screecher” Hoyt, this connection birthed the ultra-high energy project VOMIT FIST, hailing from the depths of New York City.

The trio’s recently released debut digital EP, Forgive But Avenge, will be made available in hard copy CD format via independent release on October 28, 2014. Take a listen to the track ‘Under The Rind’ now.
Featuring raw, in-your-face sonics, the Forgive But Avenge EP was recorded and engineered at Nik Chinboukas at Spin Studios (studio credits include Lamb of God, Testament and Gojira). The tracks rip through themes of rebirth, apocalyptic chaos, ecstatic dermal auto-excoriation, and transgressive ancient tantric poetry. Check below for download links and physical pre-order details.

VOMIT FIST father figure Nick “Vürdoth” Didkovsky recalls his heavy metal connections harking back to Leo’s childhood. “My son Leo and I have shared a love for metal from the time he was very young. I recall him taking Judas Priest “Painkiller” to school for show-and-tell when he was in kindergarten. Deep roots! We played a bunch of one-offs together while he was in grade school, cover tunes mostly, like ‘School’s Out’ for the fifth grade graduation ceremony, and later some Lamb of God, Black Sabbath, Kiss, etc. His drumming developed into something pretty sick through his experience at Tomato’s House of Rock. So one day, when the idea came about that he and I put a band together, I was really into it, not just because he’s my son, but because he’s such a killer musician.”

Within the last year, VOMIT FIST have practically erupted onto the underground metal scene with their dynamic live show – playing everything from hardcore matinees and DIY garage events, to all-ages shows, festival dates and club gigs. Didkovsky Sr. adds, “Performance-wise, VOMIT FIST is one of the most demanding bands I’ve ever been in, and on stage it’s a serious peer-to-peer relationship. The parental hierarchy disappears, and we’re depending on each other as equals, to execute this music at a high performance level.”

And while VOMIT FIST has only been around for a year, each member pulls influence from a rich musical background. Guitarist and composer Nick Didkovsky founded the avant-rock band Doctor Nerve in 1983, the metal band Häßliche Luftmasken in 2010, and was a member of the Fred Frith Guitar Quartet during its tenure. In addition, he has composed for a number of ensembles including Bang On A Can, ETHEL, and Meridian Arts Ensemble, and his Black Sabbath guitar lessons on YouTube have reached millions of viewers. Nick’s son Leo Didkovsky founded the death metal band Diabolicus, which released two records in its lifetime. Meanwhile, Singer Malcolm Hoyt is founding member of art punk band Adela and the Ucars, and is also active with Space Ass and Mucus (all bands Leo was a member of, as well), although the band collectively describes Skrag as having “crawled forth from the bleeding plasma bowels of a dying star 4.5 billion years ago”. Hey, we all come from somewhere.

“It’s been a really deep and very intense experience working musically with Leo,” offers Didkovsky Sr. “Leo has very strong and lucid opinions about music. It’s very healthy for me to get straight, unguarded opinions from him as we work up new tunes, with all the merciless honesty that a kid can level at a parent.”

Stephen Vicino is the founder of MusicExistence.com. He created this site to give talented musicians a voice and a way to be discovered.
@@svicino
Previous THE WORD ALIVE ANNOUNCES HEADLINE FALL TOUR
Next Progressive Masters SOEN Return with Second Studio Album Tellurian