The Word Alive has announced that they will be heading out on their U.S. fall headline tour with direct support from label mates The Color Morale.

Our Last Night, Dead Rabbitts, and Miss Fortune will join the line-up for the 31-date North American routing, which kicks off November 7th in San Diego, CA at SOMA. General Admission tickets will be available this Friday, September 12th at 10AM (Local Time). Scroll down for full tour dates.

“We hadn’t done an outright headlining tour since 2011, so it was very important for us to pick bands who were passionate about music and their fans,” explains lead singer Telle Smith. “We picked the cities and venues wanting to have some or the best intimate club shows to date. Come see us in a city nearest you with our friends in The Color Morale, Our Last Night, Dead Rabbitts and Miss Fortune!” 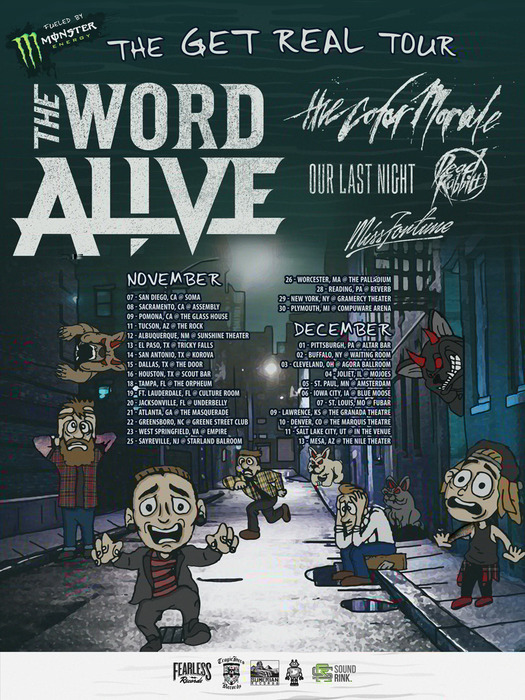 Following a successful run on the entire Vans Warped Tour, The Get Real Tour first takes the Phoenix, AZ five-piece on a headline trek across the UK and Europe with support from The Color Morale, Like Moths To Flames, and Oceans Ate Alaska. which kicks off October 19th in York, United Kingdom. The Word Alive is touring in support of new album REAL. which debuted at #33 on the Billboard Top 200 and is available in stores and on iTunes.

THE GET REAL TOUR EUROPEAN DATES
w/ The Color Morale, Like Moths To Flames, and Oceans Ate Alaska

THE GET REAL TOUR US DATES
w/ The Color Morale, Our Last Night, Dead Rabbitts, and Miss Fortune:

THE WORD ALIVE – Telle Smith (vocals), Zack Hansen (guitar), Tony Pizzuti (guitar), Daniel Shapiro (bass), Luke Holland (drums) – Since forming in 2008, The Word Alive have built that sort of trust with their diehard fan base – the sort of trust that gains you followers not just for a fleeting moment, but for a lifetime. So, it’s only fitting that the Phoenix, AZ quintet’s third full-length album for Fearless Records bears the title of REAL. Over the course of two full-length albums and two EPs, The Word Alive have risen through the ranks to become modern heavy music elite. They’ve toured with everybody from Killswitch Engage to A Day To Remember in addition to gracing the stage on Warped Tour multiple times, including a full run on this summer’s Vans Warped Tour. They’ve garnered loyal press support from the likes of Revolver and Alternative Press, to musician magazines Modern Drummer and Guitar World, as well as strong brand partnerships with Monster Energy, DW Drums and Ibanez. Respected equally by their peers and fans alike for their impressive technical musical abilities and goosebump-inducing live show that has gathered force and new fans with every gig, the band have worked hard to position REAL. to be the album that truly sees them breaking through.

Stephen Vicino is the founder of MusicExistence.com. He created this site to give talented musicians a voice and a way to be discovered.
@@svicino
Previous Izzy Malik Premieres New Video For “Just Another Boy”
Next VOMIT FIST: NYC Father/Son Grindcore Project Taps Spin Studios for New EP