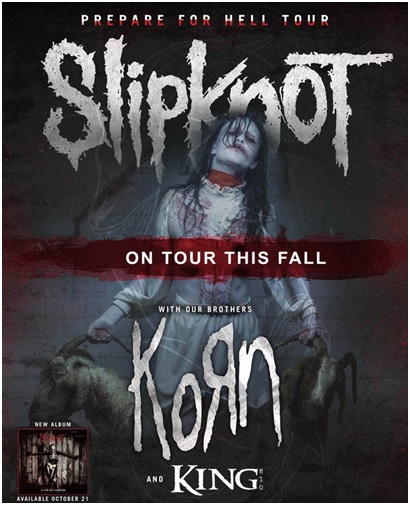 KORN JOIN SLIPKNOT ON THE “PREPARE FOR HELL” TOUR

Are you ready for one of the heaviest tours in rock history?

KORN will join fellow hard rock juggernaut Slipknot this fall on the Prepare For Hell tour, marking the first time that these two trailblazers have teamed up for a full run.

Grammy Award-winning multi-platinum hard rock innovators KORN are firing on all cylinders after a successful turn co-headlining this summer’s Rockstar Energy Drink Mayhem Festival and the release of the critically acclaimed update on 2013’s THE PARADIGM SHIFT (Prospect Park)—THE PARADIGM SHIFT: WORLD TOUR EDITION (Prospect Park). This ultimate version of the record boasts the new single “Hater” which skyrocketed to the Top 10 at Active Rock Radio upon release.

Rolling Stone recently debuted the live video for “Hater,” while the song’s fan-assisted music video hit VEVO soon after. The poignant and powerful clip, which includes actual fan accounts of being bullied, accumulated almost 600,000 views. Watch the clip–capturing KORN at their most raw and real, embracing their audience like never before–now at: http://vevo.ly/935o9F.

Don’t miss what will be remembered as one of heavy music’s most unforgettable tours with KORN, Slipknot, and KING 810 this fall.

Dates for the “Prepare For Hell” tour are below:

Stephen Vicino is the founder of MusicExistence.com. He created this site to give talented musicians a voice and a way to be discovered.
@@svicino
Previous Ooberfuse release Far Eastern Dance track “Anak”
Next NETSKY ANNOUNCES STAY UP WITH ME U.S. LIVE TOUR LAUNCHING NOVEMBER 21 IN SEATTLE