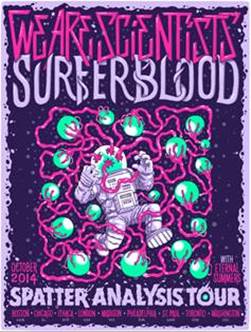 We Are Scientists Fall Tour

We Are Scientists has had a busy year. After releasing their fourth album TV en Français, March 4th via Dine Alone Records, they spent the rest of the year on a worldwide tour making stops in Europe, Australia, and North America. Watch their performance of “Make it Easy” on The Late Show With David Letterman. Regarding the tour, Keith and Chris said, “We’ve been fans of Surfer Blood’s music for years, and have played on a couple of festivals together, but the blend of the two bands in a club setting is going to be a glorious thing — high energy, big rock, with a mutual emphasis on fun, fretwork finesse, and fan fulfillment, plus a The Fast and The Furious Film Festival every day in the We Are Scientists van, between cities.”

Stephen Vicino is the founder of MusicExistence.com. He created this site to give talented musicians a voice and a way to be discovered.
@@svicino
Previous FLYLEAF ANNOUNCE FALL TOUR SET TO KICK OFF FRIDAY, OCTOBER 3 IN LUBBOCK, TEXAS
Next He Is Legend Celebrate No. 1 Album with a UK Tour