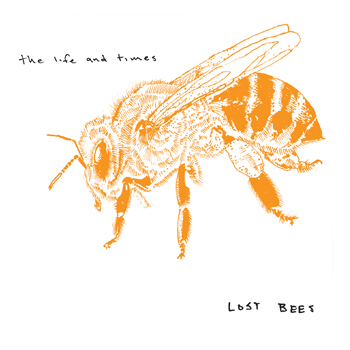 Chicago space rock trio, The Life And Times has premiered a new song this morning.  Entitled “Passion Pit“ the song is the first glimpse into the group’s forthcoming album, Lost Bees.  Dropping on August 5th via Slimstyle Records (Local H, The Hounds Below),  Lost Bees is the follow up to 2012’s celebrated album, No One Loves You Like I Do.  This will be the first self-produced effort from the band and it still contains their signature hallmarks of mood, melody and dynamics.  In addition it rocks harder than previous releases at points.

Speaking on the feel of this album as opposed to their previous ones, Allen Epley (singer/guitarist/keyboardist) says “I feel like we have gotten to a point in this band where we figured out what each of us do in it.  There’s a big level of trust in our writing process.  During the recording of this album, our drummer (Chris Metcalf) was living in Kansas City.  When he would come to Chicago, we would have binge writing sessions.  Inevitably when we got to the last day of writing, I would just say to him, give me some drum beats to write around and I would give him tempos and some ideas.  Eric (Abert, bassist) and I would be left with all of these awesome Metcalf drum moments to write around and half of the album was written that way.”

In-between the last release and this one, many fans were pleased to see Epley and his former band-mates re-form his massively influential 90’s outfit, Shiner.  In celebration of the vinyl re-release of their seminal album The Egg, Epley and Shiner had a sold-out national tour playing theater sized venues.  In addition, he has announced that he will contribute vocals to a song on the forthcoming EP from instrumental post-metal unit Pelican.  He previously appeared on that band’s celebrated 2009 album, What We All Come To Need.

Stephen Vicino is the founder of MusicExistence.com. He created this site to give talented musicians a voice and a way to be discovered.
@@svicino
Previous MERIDIAN UNLEASH ‘THE AWFUL TRUTH’
Next INCITE’s “Up In Hell” is Out Today