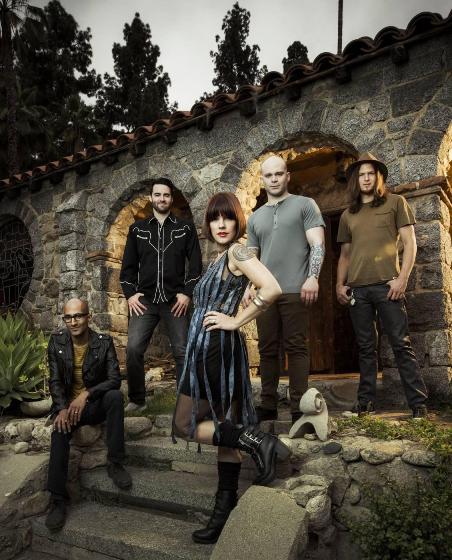 “I’m really looking forward to getting on the road starting in October,” says KRISTEN MAY.  “We have a batch of new songs we’ve poured our hearts and souls into and I can’t wait to play them live.  The music really takes on a new life when our fans are singing with us and experiencing these songs in the moment.  Also, I can’t wait to listen to Ryan White and Lullwater each night.  It’s going to be a magical tour.”

FLYLEAF—KRISTEN MAY (vocals), SAMEER BHATTACHARYA (guitars), JARED HARTMANN (guitars), PAT SEALS (bass), JAMES CULPEPPER (drums)—recorded BETWEEN THE STARS in Los Angeles with producer Don Gilmore (Pearl Jam, Linkin Park, Bullet For My Valentine, Avril Lavigne). “Don’s always looking for the magic,” says SAMEER. “For the first time, we went into the studio and let things happen. “It was about the energy and the spontaneity of a song more than anything.  It was a very refreshing approach.” KRISTEN adds: “It’s the most emotional album I’ve ever been a part of. There are some really heavy things and lyrics that weren’t easy to say.  Everybody tried to be as raw as possible when we were writing and recording. That all came out in the songs.”

The music video for the album’s first single “Set Me On Fire”—directed by Noel Maitland (Speechless, Kings of Summer) and shot in an abandoned warehouse in downtown Los Angeles—recently premiered on Billboard.com along with a Q&A you can read HERE. You can watch the video for “Set Me On Fire” HERE.

BETWEEN THE STARS is available for pre-order on iTunes HERE and Amazon HERE.

Catch FLYLEAF on tour this fall:

Stephen Vicino is the founder of MusicExistence.com. He created this site to give talented musicians a voice and a way to be discovered.
@@svicino
Previous SPEAKING THE KING’S CONFIRMED FOR ROCK THE BOAT 2014 MUSIC FESTIVAL
Next We Are Scientists Fall Tour