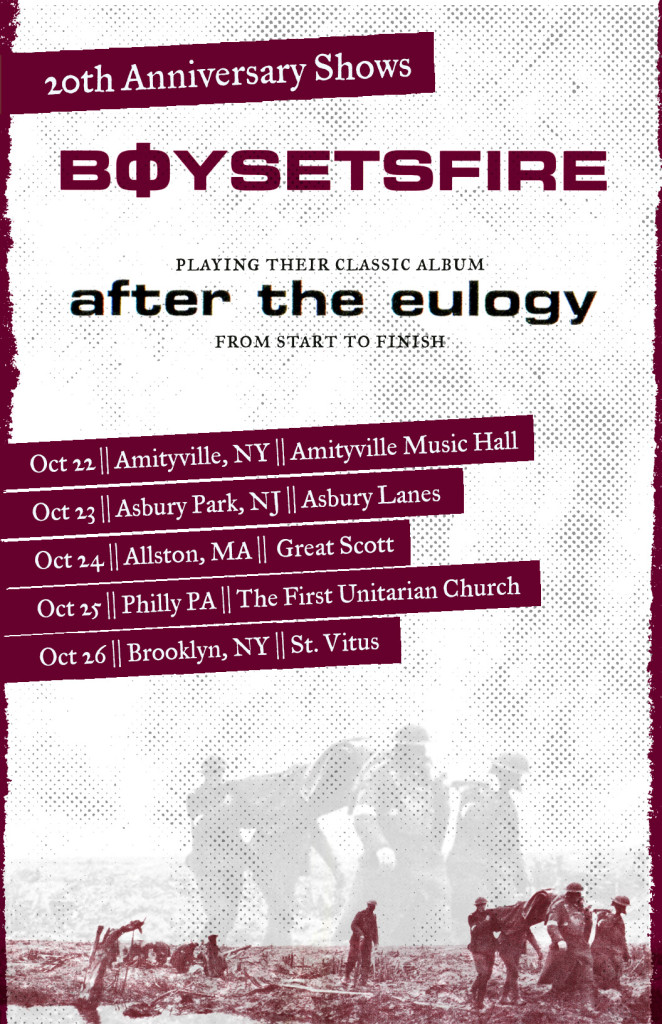 BOYSETSFIRE ANNOUNCES ‘AFTER THE EULOGY’ TOUR

BoySetsFire have announced a slate of shows celebrating their 20th anniversary as a band. They’ll play their beloved record, After the Eulogy, all the way through at each gig – check out the dates below.  After the Eulogy was originally released in 2000 on Victory Records and reissued the next year by Wind-Up Records and features some of the band’s most enduring material to date, like the opening one-two wallop of the fierce title track and desperate “Rookie”, the nearly balladic “My Life in the Knife Trade” and the pulsating “Twelve Step Hammer Program”.

BoySetsFire released their first studio album in 7 years, While A Nation Sleeps, last summer on Bridge Nine Records.  The album was called  “…one of their most cohesive melodic hardcore albums, right up in line with 2000’s After The Eulogy…” by Alternative Press Magazine.

Tickets for the After The Eulogy Tour will  be available Friday, September 5th.  More information at  http://on.fb.me/1BbHRAR .

Stephen Vicino is the founder of MusicExistence.com. He created this site to give talented musicians a voice and a way to be discovered.
@@svicino
Previous Celldweller Releases Title Track “End of an Empire” from new Album
Next Izzy Malik Joins the High School Nation Tour