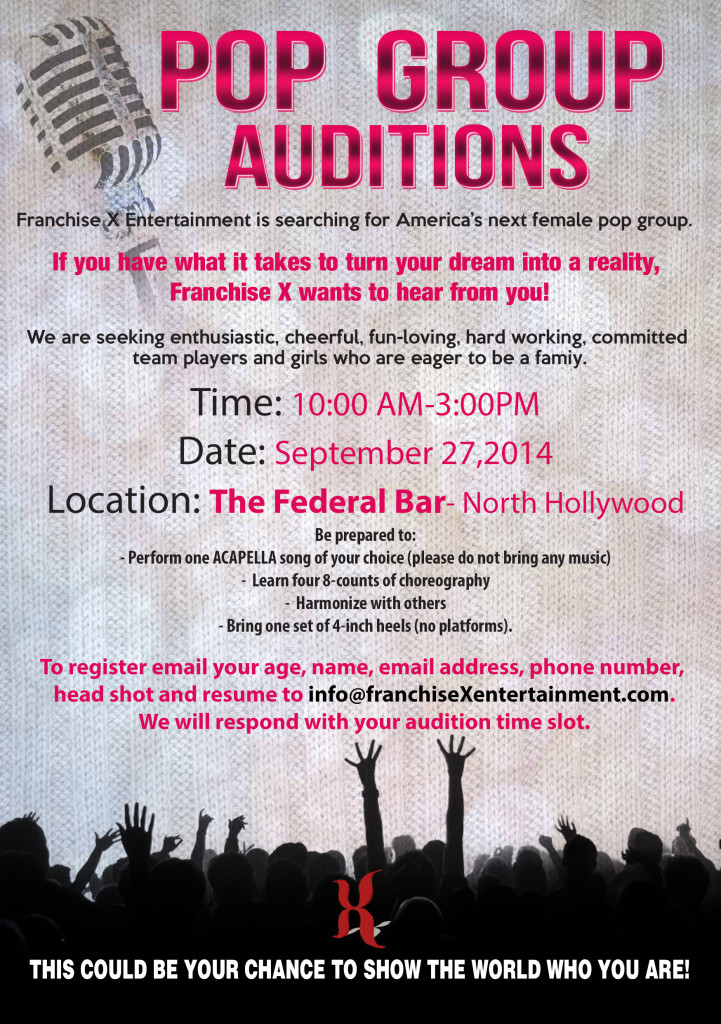 Franchise X Entertainment, a recording company with previously released artists such as Avelina Rose, Ben Vera, Diego Bay, T.J. Hooker, and Notcho are now searching for the next big American female pop group, and will soon be holding auditions for artists fitting this description.

The group will be a fusion of The Spice Girls, The Pussy Cat Dolls and TLC. Franchise X Entertainment is looking to form a female pop group powerhouse that is vivacious, charismatic, and has a sound that will appeal to the world. Franchise X Entertainment holds recording contracts with many other previously released artists.  “We are seeking dynamic young ladies that possess the following personalities and qualities: Enthusiastic, Cheerful, Fun-loving-Hard working, committed, always a team player and eager to be a part of a musical family”

Artists signed with this label:

DJ Ben Vera- a cutting edge music producer and video DJ from Los Angeles with over 10 years of club scene experience. He has worked his magic from on-air radio to The Highlands Night Club at the famous Kodak Theatre Complex in Hollywood. DJ Ben Vera experiments in futuristic sounds using the innovative video-DJ technology.

Notcho- a hip-hop artist who started out in his early teens by joining in rap battles until discovered by his manager. His artistic side is shown by the way he tells a story, shares his experiences, and relays positive messages and inspirations through his music. Notcho’s music ranges in subject from pride to politics, and he’s performances are full of energy and intense humor.

The list of Panelists for the up-coming auditions is:

We are seeking dynamic young ladies that possess the following personalities and qualities: Enthusiastic, Cheerful, Fun-loving-Hard working, committed, always a team player and eager to be a part of a musical family

Information about the audition is as follows:

Anyone wishing to attend the audition should be prepared to perform one ACCAPELLA song of your choice (do not bring any music), learn four 8-counts of choreography, be able to harmonize with others, and bring one set of 4-inch heels (no platforms or wedges).

To register for the audition and receive an audition time slot, you must email your name, age, phone number, email address, head shot, and resume to the following: info@franchiseXentertainment.com

Franchise X Entertainment is only accepting applications for this audition via email. Please do not inundate the Recording Company by other means of correspondence.  All required information must be included, or you will not receive a time slot. Applicants must be prepared to spend at least 3 hours at the audition.  Early registration is highly recommended. There are limited time slots available for auditions in one day.

The music industry has never been an easy medium to break into and many spend their entire lives pursuing their dreams to sustain their careers. The audition process is an exciting and compelling way for new artists to stand before a panel of experts and showcase their talent. Franchise X Entertainment is excited to begin this search and aide you in your dreams of breaking into the music industry.

Stephen Vicino is the founder of MusicExistence.com. He created this site to give talented musicians a voice and a way to be discovered.
@@svicino
Previous Versus The Victor – The Cynic
Next Next Life – Bella Saona