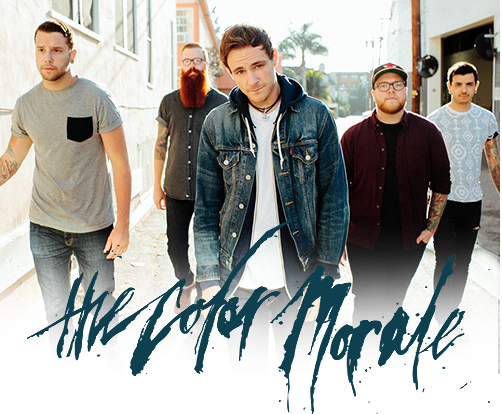 In advance of the release of their new album Hold On Pain Ends, The Color Morale is allowing fans to hear it in its entirety ahead of its September 2nd street date.

“This record is about pain, and how we are all a commodity to one another. Hold On Pain Ends is an authentic record about what I’ve seen observing others, by spending an entire year on the road with my ear to the ground with my face in the crowd. We aren’t ever alone as long as we’re alive to vocalize our struggles with one another. We vocalize not for the attention, but for the connection that keeps us from self sabotage. There are two kinds of pain in life, pain that hurts  you and pain that changes you. This is Hold On Pain Ends.” – Lead singer, Garret Rapp

Hold On Pain Ends is available for pre-order on iTunes, which offers instant downloads of “Outer Demons”, “Suicide;Stigma (Feat. Dave Stephens)”, and “Damnaged” to fans who pre-order.

The Color Morale will kick-off a U.S. tour this fall as direct support to We Came As Romans. The line-up also includes For Today, Crossfaith, and Palisades starting on September 11th in Lansing, MI.

THE COLOR MORALE – Garret Rapp (Vocals), Devin King (Guitar), Aaron Saunders (Guitar), Steve Carey (Drums), Mike Honson (Bass) – Known to skillfully combine the elements of intricate musicianship with a passionate message, the Rockford, IL five-piece are masters of their craft. With shredding riffs and soaring choruses, the band puts as much emphasis on the message found in the songs as they do in their sound, and this is what their fans value most. Since their formation in 2007, the band has released three albums to date We All Have Demons, My Devil In Your Eyes, and Know Hope, and have toured with the likes of The Devil Wears Prada, August Burns Red, Of Mice & Men, Attack! Attack!, We Came As Romans, and have just wrapped up a summer-long stint on the Vans Warped Tour. Lead singer Garret Rapp was recently featured on the cover of Alternative Press’ Warped Tour Issue.

w/ We Came As Romans, For Today, Crossfaith, and Palisades

Stephen Vicino is the founder of MusicExistence.com. He created this site to give talented musicians a voice and a way to be discovered.
@@svicino
Previous Gallery: Powerman5000 Live at BB Kings in NYC, 08.21.14
Next PINK SLIPS: Debut Album of “Internet Punk Generation” Music