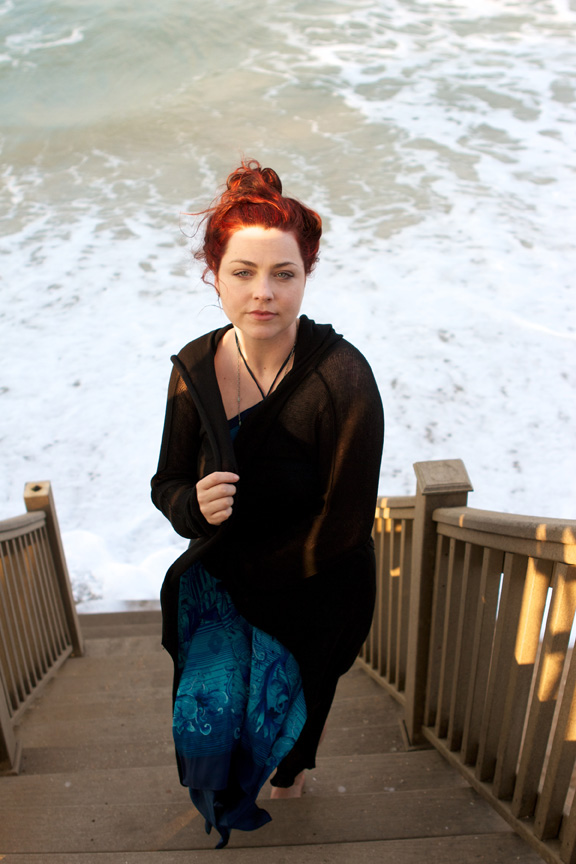 Aftermath, music from and inspired by the independent film “War Story,” represents a plethora of “firsts” for Amy Lee, founder/ vocalist/songwriter for the multi-Platinum rock band Evanescence.  It marks her most significant entree to date into the world of film scoring, her first album release since 2011’s Evanescence self-titled album, the first time she’s worked on a project of her original material that wasn’t a full-blown, high-budget major production, and it represents an entirely new writing process.   Aftermath was a collaboration between Lee, Dave Eggar and Chuck Palmer, and while the music on it may be a 180-degree turn from what Evanescence fans have come to expect, it has Amy Lee’s fingerprints all over it.  Aftermath is available digitally today, Monday, August 25 via Amazon.com and iTunes (Ingrooves).

“‘War Story’ is a very dark, very introspective film,” said Lee, “so the music on ‘Aftermath’ is not what my fans will be expecting.  We’ve combined all sorts of different sounds – synthesizers, cellos, trombones, harps – all on top of each other.  In many ways, we didn’t write a traditional soundtrack album, we used music to create a series of atmospheres.”

Lee is particularly excited about the song that opens  Aftermath, “Push the Button,” an electronic track that she performed, recorded, engineered, produced, and mixed.  “It’s quite a departure for me,” said Lee, “but Mark (Jackson, the film’s writer/director) had the perfect scene in the film for it.”

Eggar, a classically-trained composer and musician who studied at Juilliard and Harvard, has worked together with Lee for more than a decade, primarily on acoustic versions of Evanescence songs.  Eggar originally brought Lee into the Aftermath project  to provide vocals on a handful of songs for the film, but one thing led to another, and her contributions mushroomed.  For Lee, the experience with Eggars was liberating, with Eggar and “War Story” Jackson having created an environment that was creatively galvanizing.

Lee’s internationally renowned band Evanescence has sold more than 25-million albums worldwide.  The band’s 2003 debut album, Fallen, spent 43 weeks in Billboard’s Top 10, and 104 weeks on the Billboard Top 200 chart.  Fallen produced two Top 10 singles, “Bring Me To Life” and “My Immortal,” and Evanescence won two Grammys at the 2004 awards show, one for Best New Artist and one for Best Hard Rock Performance. Fallen  went on to achieve seven-times-Platinum status in the U.S., Canada and Australia, and was certified Gold or Platinum in thirty-eight other countries.   Subsequent studio albums, The Open Door (2006) and the self-titled album (2011) each debuted in the #1 spot on Billboard’s Top 200 and achieved gold, silver or platinum status in multiple countries around the world.  The band received a third Grammy nomination for The Open Door track “Sweet Sacifice” (Best Hard Rock Performance).  The band’s 2004 live DVD release, Anywhere But Home, has achieved five-times Platinum worldwide status.  Lee herself has been honored with the National Music Publishers’ Association’s Songwriter “Icon Award,” and by United Cerebral Palsy of New York as part of its “Women Who Care” program.

“War Story” premiered at January’s Sundance Film Festival and was released theatrically in the U.S. on July 30 through IFC Films.  The film stars Catherine Keener, Hafsia Herzi and Ben Kingsley, and tells the story of a battle-scarred photojournalist who risks her life to rescue a young refugee.  Variety wrote the film is “a quietly powerful drama…critical kudos should be plentiful.”

Stephen Vicino is the founder of MusicExistence.com. He created this site to give talented musicians a voice and a way to be discovered.
@@svicino
Previous Interview with Haulix Founder Matt Brown
Next PLATINUM SELLING ROCKERS TRAPT RELEASE ACOUSTIC VERSION OF #1 HIT “HEADSTRONG”