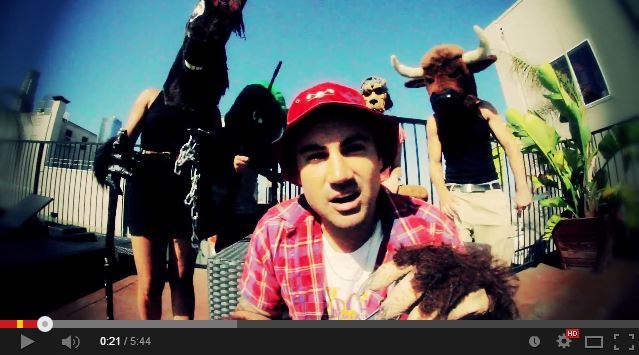 Egyptian-blooded, Los Angeles-based underground emcee Radioinactive presents the Hazard Gibson-directed music video for “Animal”, his Burt Gregory-produced single from his new album Hip Hop Helmet. Radio was part of Log Cabin, the ’90s crew that included a young Murs and Eligh. Rolling Stone and URB co-signed him soon after he rapped as a goat on “Farmer’s Market Of The Beast” from producer Omid‘s 1998 compilation Beneath The Surface, also featuring Dilated Peoples and Freestyle Fellowship. He dropped the solo albums Pyramidi, Free Kamal and Soundtrack To A Book. He collaborated with his crew Shape Shifters on Shape Shifters Was Here, and Daedelus and Busdriver on The Weather. The title a reference to the ubiquitous baseball cap, Hip Hop Helmet is out now.

Stephen Vicino is the founder of MusicExistence.com. He created this site to give talented musicians a voice and a way to be discovered.
@@svicino
Previous BILLY RAY CYRUS: Joins Dave Stewart, Martina McBride And An All-Star Crowd for “The Beatles’ 50th At The Bowl” Aug. 22-24 at The Hollywood Bowl
Next Urban Flamenco