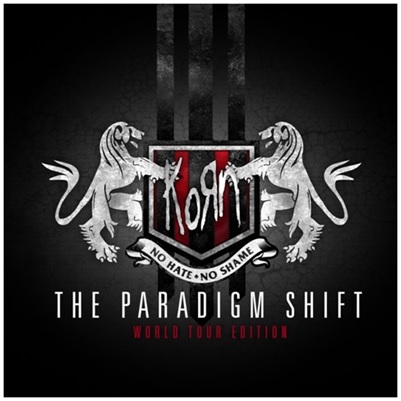 KORN AND THEIR FANS TAKE ON THE HATERS

Grammy Award-winning multi-platinum hard rock luminaries KORN premiered their fan-assisted official video for “Hater”–the lead single off their world tour edition deluxe reissue album, THE PARADIGM SHIFT: WORLD TOUR EDITION (released July 22 on Prospect Park)–exclusively on VEVO. Directed by Yarvo Productions, the video features fan-submitted video clips where they share personal experiences of being a victim of bullying, abuse or hatred and how that affected them. Watch the video for “Hater” above.

“Hater” invaded radio airwaves last month and has already vaulted into the Top 10 at Active Rock radio, a testament to the strong relation KORN’s fan have to the music and lyrical content. On “Hater,” frontman Jonathan Davis’ lyrics address challenges of victims of bullies and haters. In this video clip, the band has broken the fourth wall by providing an opportunity for real fans to speak out about their experiences of being hated.

“Almost everyone has felt bullied, pressured and beat down in their life by their haters,” says Jonathan Davis. “This video helps to give a public voice to some of the challenges real people have faced, and reminds us all that self-harm and suicide.”

The song kicks into gear with the seminal grinding guitar volley between Brian “Head” Welch and James “Munky” Shaffer. Meanwhile, Reggie “Fieldy” Arvizu cranks out a throbbing bass bounce punctuated by Ray Luzier’s impenetrable percussion. At the eye of the storm, Jonathan Davis delivers a haunting verse that quickly blossoms into an eerily unforgettable chorus. For the track, the group teamed up with hitmaker/producer Don Gilmore, who also produced last year’s number eight-debuting LP, THE PARADIGM SHIFT, as well as the group’s #1 active rock radio smash “Never Never.”

Earlier this week (8/18), Rollingstone.com premiered the live version of the video for “Hater” featuring video cobbled together of the band’s wildly enthusiastic audiences from across the globe.

The world tour edition double album–THE PARADIGM SHIFT: WORLD TOUR EDITION–features three brand new songs (“Hater,” “Die Another Day” and “The Game Is Over”), a bevy of tracks from last year’s album recorded live all over the world and expanded artwork. THE PARADIGM SHIFT: WORLD TOUR EDITION is available exclusively in stores at Best Buy or online at Bestbuy.com or iTunes.

Stephen Vicino is the founder of MusicExistence.com. He created this site to give talented musicians a voice and a way to be discovered.
@@svicino
Previous Urban Flamenco
Next PORTER ROBINSON’S DEBUT ALBUM WORLDS