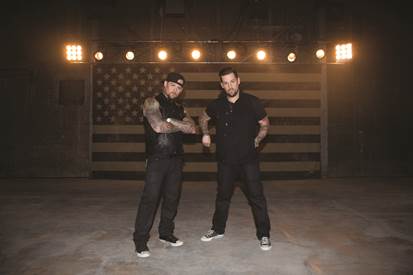 THE MADDEN BROTHERS SET TO PERFORM ON THE TONIGHT SHOW STARRING JIMMY FALLON!

The Madden Brother’s highly-anticipated debut album Greetings From California is set to release September 16th via Capitol Records. The lead single, “We Are Done,” a soulful, ’60s-inspired tune that they wrote with highly acclaimed producer Eric Valentine, was released on June 2nd to substantial praise, with MTV stating the single is a “vibrant, sun-soaked summer surprise.” “We Are Done” is the #1 Single in Australia and New Zealand, and is continuing to climb the US pop and hot ac charts, with the official music video currently having over 1 million views.

Recently The Madden Brothers launched a program on Instagram asking fans to submit photos of themselves with signs saying what they’re “done” with and include #WeAreDone.  Thousands of submissions have been received so far.

About The Madden Brothers

With the multi-platinum success of their band Good Charlotte, global music stars Joel and Benji Madden, formed a new band called The Madden Brothers–a moniker whose simplicity reflects their earnest desire to express who they truly are. With 5 full length albums under Good Charlotte, Benji and Joel have sold over 10 million copies worldwide and have acquired an enormous international fanbase, headlining shows and festivals around the world, and earning a place in history with their radio-ready pop-punk sound captured on such albums as their 3x-platinum breakthrough The Young and the Hopeless. Joel and Benji have two Teen Choice Awards and eight MTV Music Awards.  In 2011, Joel was invited to appear as a coach on the highly rated Australian version of The Voice, which is currently airing its new season.  Benji will join Joel as a coach on the upcoming season of The Voice Kids in Australia. The brothers also own and operate a fully functional recording studio in Hollywood where they write, record, and produce music for other artists and were the 2009 U.S. spokespeople for the UNICEF Tap Project providing clean water for millions of children across the globe.

Stephen Vicino is the founder of MusicExistence.com. He created this site to give talented musicians a voice and a way to be discovered.
@@svicino
Previous RIGHTEOUS VENDETTA To Release New EP ‘Defiance’ September 2, 2014; Tour Dates Announced With NONPOINT
Next ADRENALINE MOB ANNOUNCE TOUR DATES