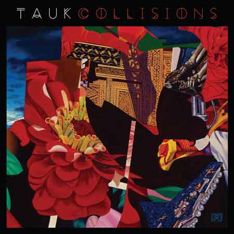 TAUK is also proud to announce today that their new single “MindShift” off Collisions has been added into regular rotation on Sirius XM Jam On. TAUK’s fans can now hear this new track playing on Jam On alongside TAUK’s previous singles, “In the Basement of the Alamo” and “Dead Signal,” both songs from the band’s 2013 LP, Homunculus.

To Charlie Dolan, bassist for TAUK, this new album is the natural progression following an album like Homunculus. “I like to think of this album as an extension of Homunculus,” explains Dolan. “We took some of our favorite parts of that album and expanded on them with new sounds and musical flavors. Its music that makes you think, but can also make you dance.”

The album title itself for Collisions reflects the spirit of the band as a whole. Guitarist Matt Jalbert explains, “Being an instrumental band, our music is more about stirring up a feeling rather than meaning something specific. The word ‘Collisions’ lets your mind make up an image of its own. It’s a little bit open ended, but at the same time powerful.”

The album art is a piece by Jeff Jordan, graphic artist who previously worked with Mars Volta among others. The puzzle-like art on Collisions reflects the band’s goal for each musical composition they write. Alric “AC” Carter (keyboard/organ) explains, “in the artwork its clear to see there are many parts that build the entire picture. Some parts play supporting roles and other sections are more visible. However, the most important aspect is the bigger picture.”

TAUK manages to create a live show experience to match their masterfully produced recordings. The unique chemistry and relaxed-focus of TAUK’s performance is undeniable, but their ability to create immensely melodic and emotional music without a vocal lead is what continues to captivate and impress music lovers across all genres. TAUK has landed spots on the biggest festivals such as Bonnaroo, The Hangout Music Festival, Summer Camp, and The Allman Brothers’ Peach Fest and played in direct support for some of the most respected names in music including The Funky Meters, Robert Randolph & the Family Band, Lettuce, Karl Denson’s Tiny Universe, moe., Dopapod, Tim Reynolds & TR3, Tea Leaf Green, Toubab Krewe, The Mantras, The Revivalists and more.

TAUK’s chemistry can be attributed to their history. Forming in middle school, a majority of TAUK’s members have been playing together for over a decade. The group experimented with their sound over the years both individually while studying at top music universities and conservatories, and together as a band – always working to find their ideal sound. It wasn’t until 2012 with the addition of drummer, Isaac Teel, and the realization the band could build a fan base around a completely instrumental act, that the pieces fell into place. Since then the band has continued to push the envelope of their musical vision, creating instant fans across the country on a nightly basis.

Stephen Vicino is the founder of MusicExistence.com. He created this site to give talented musicians a voice and a way to be discovered.
@@svicino
Previous ALL THEM WITCHES RELEASE LIGHTNING AT THE DOOR ON SEPT. 16
Next THE ULTIMATE FAN EXPERIENCE: ALMOST KINGS Launch Fan Focused Indiegogo Campaign