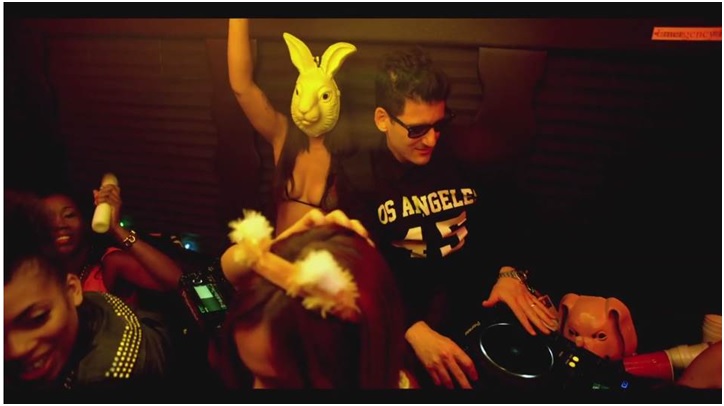 Ready to party up? DESTRUCTO has just unveiled the music video for his latest single “Party Up” featuring YG on VEVO. For the cinematic clip, the Los Angeles producer and DJ and pre-eminent West Coast MC hijack a party bus for one raw, raucous, and rollicking night. Mayhem, debauchery and “g-house” grooves abound throughout this trip. The sound of DESTRUCTO‘s forthcoming WEST COAST EP [Insomniac Records/Interscope], due out soon, comes to life vividly on this wild ride.

This past weekend, DESTRUCTO brought the intensity and good times throughout his set at the sold-out HARD SUMMER festival in Los Angeles. In addition, “Party Up” and numerous other anthems from his arsenal including “Higher” and “Technology” piped throughsets by other artists over the course of the weekend. It proved to be the hottest HARD yet for DESTRUCTO.

He’s continuing his road domination on his WEST COAST World Tour. He performs at Bassmnt in San Diego, CA on August 8 followed by a high-profile appearance at the Budweiser Made In America Festival in Philadelphia August 30, HARD Day of the Dead November 1 and more.  DESTRUCTO’s current routing follows below.

DESTRUCTO (Gary Richards) is also the founder of HARD Events—the world-renowned event and festival company recognized for landmark festivals such as HARD SUMMER, HARD Day of the Dead and the three-day electronic music cruise HOLY SHIP!  He has been included on the “50 Most Important People in EDM” list by Rolling Stone twice, Billboard’s “EDM Power Player” list,  InTheMix’s “50 Most Powerful People in EDM” list and Do Androids Dance’s “20 Most Influential People in EDM” list.

Stephen Vicino is the founder of MusicExistence.com. He created this site to give talented musicians a voice and a way to be discovered.
@@svicino
Previous Drugs are bad mkay?
Next ROB ZOMBIE Narrates ROCKSTAR ENERGY DRINK MAYHEM FESTIVAL Puppy Rescue Mission PSA