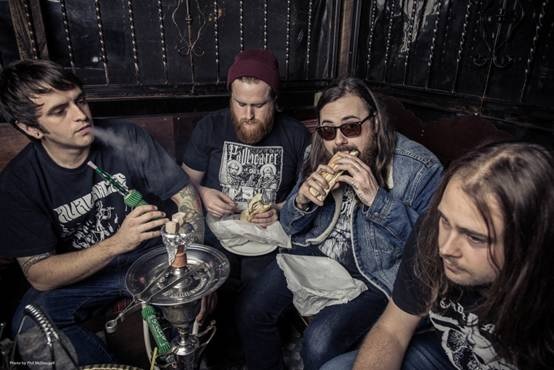 HANG THE BASTARD unleash video for “Sex In The Seventh Circle”

“Sex In The Seventh Circle” is the first single to be lifted from its namesake album and a testament to the gigantic sound forged on this record by the ‘Bastard.

The band comments: “Sex In The Seventh Circle is the first new song that people will hear from the new album. We gave everyone a taste at the start of the year with Sweet Mother but we feel that we have gone even further into the direction we genuinely wanted this band to go. The video alongside the music is something we are equally proud of and thanks to the vision of Chris Hugall, we have achieved what we wanted from the footage. A band should be allowed to take chances and risks in the music they write. To be able to have selfish freedom in how they create. We hope everyone enjoys what we have spent a long time creating. It means a lot to us.“

Produced by Steve Sears at Titan Studios in London (Gallows) and with jaw dropping conceptual art from Daniel P Carter, Sex In The Seventh Circle promises to be HANG THE BASTARD’s iron clad stamp on the worldwide heavy music scene. Dripping with acidic bile and fuzz fuelled venom, HANG THE BASTARD’s latest creation is a lesson in blunt force trauma but also has a dynamic, more subtle streak of melody throughout. The result is a sonic union of the heaviest Doom, the most righteous Metal, and an undoubtedly old school vibe that is as much Sleep and Sabbath as it is Crowbar and COC.

The album will be released on September 22nd in Europe and on October 14th in North America via Century Media Records.

Stephen Vicino is the founder of MusicExistence.com. He created this site to give talented musicians a voice and a way to be discovered.
@@svicino
Previous EP: WOO CHILD, HEIRS
Next ECHOSMITH CONFIRMS FALL TOUR DATES WITH AMERICAN AUTHORS IN OCTOBER, HEADLINE RUN IN NOVEMBER