Fans in North America will have another chance to get ratchet with BORGORE this year.

Electronic dance music’s most scandalously wild rapper, singer, songwriter and producer has just lined up dates for the third phase of his #NEWGOREORDER tour. This run comes hot on the heels of one of his most successful headline shows in America to date when he sold out Governors Island in New York City, leaving over 3400 fans excited, ecstatic and eager for much more.

The third leg of the #NEWGOREORDER tour kicks off August 29 at Mansion in Miami Beach, FL. It makes a stop at the Budweiser Made In America Festival in Los Angeles, lands at TomorrowWorld in Georgia and hits major markets across the country before wrapping up back in Miami November 12 for the Mad Decent Boat Party.  Tickets go on sale for all new shows tomorrow (August 5) at 11 am pt at www.newgoreorder.com.

BORGORE—aka the Israeli-born Asaf Borger—is enjoying one of his biggest and baddest years yet. His latest album #NEWGOREORDER (Buygore/Dim Mak) debuted at #1 on iTunes Top Electronic Albums Chart and clinched #3 on Billboard’s Electronic Albums Chart, #3 on the Top New Artist Albums Chart, #22 on the Top Independent Albums Chart, #44 on the Overall Digital Albums Chart  and #112 on the Top 200. The record sees him lace gritty electro house with booming trap, wily dubstep, and a scintillating vocal delivery with lyrical content that garnered him a very talked-about Buzzfeed major profile. (Read it here: http://www.buzzfeed.com/staceyanderson8484/borgore)  The sound drew in high-profile collaborators including the legendary Malcolm McDowell who delivers the #NEWGOREORDER manifesto during the album opener and superstar Miley Cyrus who adds a sexy spunk to “Decisions.” 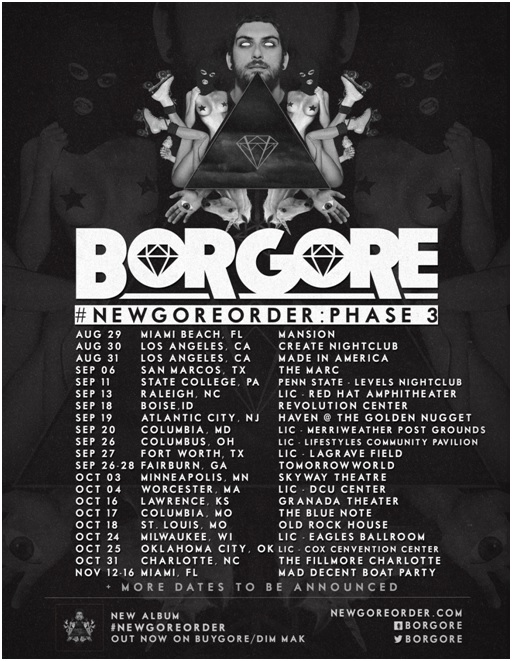 Make sure to catch BORGORE up close and personal during phase three of the #NEWGOREORDER Tour this fall. Before then, today (August 4) and tomorrow (August 5) from  10pm – 12am PST, BORGORE will be hosting a live video game and music hybrid broadcast on Twitch, the world’s leading video platform and community for gamers. During this special listening party on his Twitch channel (www.twitch.tv/borgore), he will be taking a deep dive into the backstory of songs on his latest album while showcasing his Counter-Strike: Global Offensive skills.  Fans can also ask him anything this Wednesday, August 6 during his www.reddit.com “Ask Me Anything” session happening at 3 pm PT.  Be the first to get the exclusive scoop on the #NEWGOREORDER Phase 3 tour, chat with BORGORE about his album’s inspiration and understand the mind behind the recent “Ratchet” single & video and more.

Stephen Vicino is the founder of MusicExistence.com. He created this site to give talented musicians a voice and a way to be discovered.
@@svicino
Previous YELLOWCARD Announce Fall Tour with Memphis May Fire
Next Scottie Flippen – “Get it Off Ya Chest