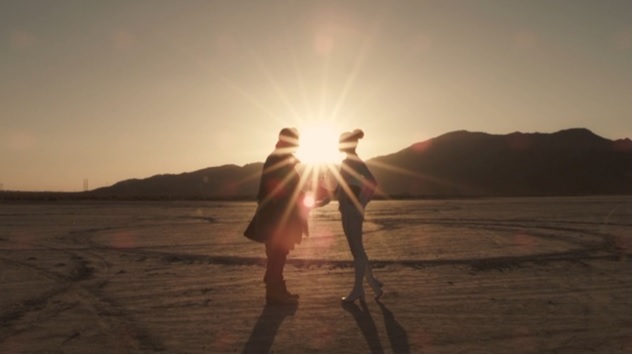 The official music video for ABOVE & BEYOND’s summer hit “Blue Sky Action”–directed by Ken Clark (who did the same honors for the band’s “Sticky Fingers” video)–is a cinematic sci-fi immersion that joins the dots between the apocalyptic desert terrain of Mad Max and the toxic town love story of Wall-E. The video for the song, which is available now at all digital retailers and will appear on ABOVE & BEYOND’s early 2015 album (title TBA) on Anjunabeats/Ultra Music.

Opening with the male protagonist rummaging through rubble in a desolate, life-starved dystopia, the video captures both the apocalyptic despair of the song’s lyrics and the exhilaration of its hooks and riffs, here represented through spectacular sci-fi bike chases and a widescreen cinematic beauty. While technology and futuristic gadgets lay in every direction, the protagonist only finds his true release when he receives an unexpected visit from a catsuit beauty from outer space. Only then does he truly become the “king for a day” that the song’s more optimistic lyrical counterpoints proclaim.

This Friday, August 1 ABOVE & BEYOND will perform on Perry’s Stage at Lollapalooza at Grant Park in Chicago. Later in the fall they’ll return for their sold-out headlining show at the famed Madison Square Garden in New York City on Saturday, October 18, to be broadcast live, marking the 100th episode of their world renowned Group Therapy radio show. ABOVE & BEYOND are the first British electronic act to headline the famed venue.

Tags ABOVE & BEYOND Above and Beyond Blue Sky Action Music Video

Stephen Vicino is the founder of MusicExistence.com. He created this site to give talented musicians a voice and a way to be discovered.
@@svicino
Previous SUNFLOWER DEAD / POWERMAN 5000 / (HED) PE Tour Kicks Off Tomorrow in Sauget, IL!
Next Can Mitchell Royél Become The King of Indie?