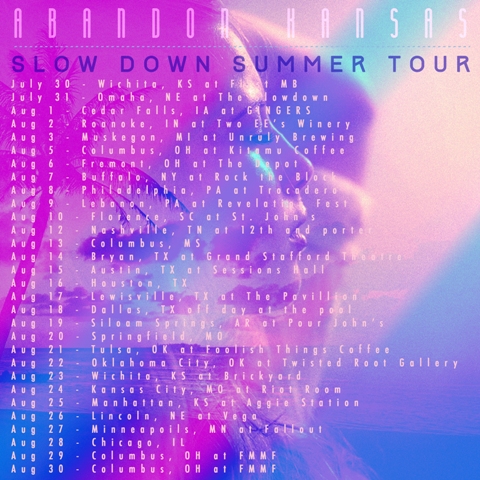 Abandon Kansas To Tour Midwest | New Track “Slow it Down”

Wichita-based indie pop quartet Abandon Kansas will head out on a 4 week tour of the Midwest starting on July 30th in Wichita and wrapping up on August 30th in Columbus, OH. In addition to hitting the road, the band has also released a new track entitled “Slow it Down” – the follow up single to 2013’s A Midwest Summer EP. Abandon Kansas have recruited guitarist Logan Ryan of The Notionaries to take over guitar duties for the tour along with Nick Bunda, who will be playing drums. Original members Jeremy Spring and Nick Patrick will round out the lineup. The band will be offering up physical copies of their first album You Build a Wall (limited to 100) exclusively on the tour, while also playing tracks from every album released since 2007.

The new track “Slow it Down” was produced by Dustin Burnett, who also produced two of the band’s previous releases in Turn it to Gold and A Midwest Summer. “It’s just a fun idea we’ve been throwing around for a long time,” explains vocalist Jeremy Spring on the inspiration of the track. “We even played an early version of this song a few times in 2012.”

To close out the tour on August 30th, fans can catch Abandon Kansas at the upcoming Fashion Meets Music Festival in Columbus, OH. The band will also be making an appearance at Revelation Festival in South Annville Township, PA on August 9th.

8.8 Philadelphia, PA @ The Balcony at the Trocadero

Stephen Vicino is the founder of MusicExistence.com. He created this site to give talented musicians a voice and a way to be discovered.
@@svicino
Previous Moral Mazes – Stay Unprepared
Next CHARM CITY DEVILS – “SHOTS”