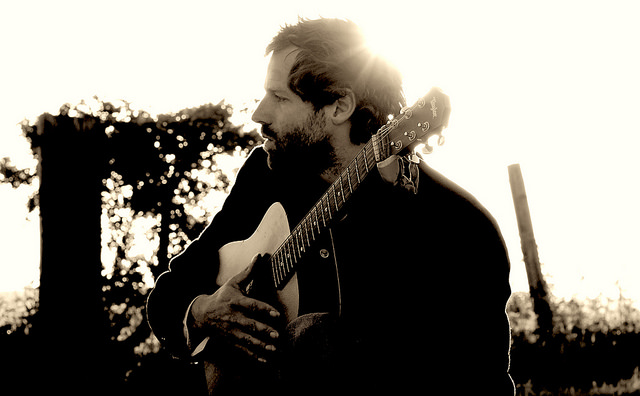 From a major label deal with Dreamworks at 15, to 2 years work with Leftfield, a spell with trance outfit Younger Brother, collaborations with British jazz and electronic collective the Cinematic Orchestra, and now his debut solo album, Ruu Campbell has crossed the genre-bundary repeatedly in his fledgling career.

Infused with his natural warmth and spirit, his debut solo record is one that will be loved by any devotee of the bucolic charms of Nick Drake and John Martyn. Already ahead of its release three tracks from it — ‘The Call,’ ‘Crossroads’ and ‘Mathereal’ — have been featured in NBC’s smash hit series ‘Parenthood,’ while others have been employed for shows on MTV and ABC.

One day, back when Ruu Campbell was still a reluctant city dweller, his house got robbed. For many, it would have been a moment of physical and emotional trauma. But for Ruu, in the wider scheme of things, all was well. They didn’t steal his guitars.

Such is the unswerving spirit of this captivating English singer-songwriter that as long as he can keep his music and the people he loves close to him, that’s all he needs. Especially since that break-in was one of the catalysts for Campbell and his family to leave the city for the pastoral inspiration of the west country. The result is the album ‘Heartsong,’ and it’s guaranteed to be one of this year’s most delightful acoustic pleasures.

Respected for a varied background that includes his vocal collaborations with Leftfield, a major label adventure and writing and performing with the electronic band Younger Brother, Campbell has reinhabited his acoustic roots to make the album that’s always been inside him.

Infused with his natural warmth and spirit, and with its gorgeously deft use of guitars, flute, cellos and violins, ‘Heartsong’ is a record that will be loved by any devotee of the bucolic charms of Nick Drake and John Martyn, but with Campbell’s stamp gently embossed on every elegantly-crafted track

No fewer than three songs on the album — ‘The Call,’ ‘Crossroads’ and ‘Mathereal’ — have been featured in the high-profile small-screen setting of NBC’s smash hit series ‘Parenthood,’ while others have been employed for shows on MTV and ABC. The recently-completed movie ‘Barking At Trees,’ starring leading British actors Jessica Hynes, Tom Payne and Tommy Flanagan, also features ‘The Call.’

Stephen Vicino is the founder of MusicExistence.com. He created this site to give talented musicians a voice and a way to be discovered.
@@svicino
Previous War on Women Signs to Bridge Nine Records
Next Megosh Premiere Music Video for “Body Works”