Home / News / New Media / Sarantos new harsh rock song – I’d Give Anything, charity for this one is St Judes Hospital

Sarantos new harsh rock song – I’d Give Anything, charity for this one is St Judes Hospital

Sarantos is finally releasing his long-awaited and eagerly anticipated 1st solo artist music album on November 18th 2014. Sarantos’ music has received rave reviews so far and he relishes this chance to pursue his life long dream.

Sarantos unique sound has been best described by industry insiders as “an emotionally powerful vocal style masterfully united with music that is a fusion of classic 80s rock blended with modern soft rock and pop music!”

Sarantos currently has over 1M twitter followers, 450K Facebook likes and is rated #4 on Reverbnation in the pop genre. Sarantos was invited to the Toronto Music Festival on May 6th and performed with his new band to a sold out live audience of over 200 people.

Having undergone several personal challenges with Sarantos’ father passing away two years ago after a long hard-fought battle with lung cancer, dealing with personal health issues like asthma and allergies which affected his singing style, going thru life’s ups & downs, the timing is finally right. Sarantos main motivation, however, is to raise money for charity.

33% of any music related sales are going straight to charity!

Sarantos has always been inclined to help people in need and is proud to launch this CD as a way to donate a portion of proceeds to charity, hopefully inspiring other artists to do the same. The 11 charities chosen for each song include American Cancer Society, American Lung Association, Make-a-Wish Foundation, American Heart Association, St Jude’s, Hellenic Academy, ASERF, American Red Cross, Children’s Hospital of Chicago, Chicago Medical School, Thanioton Society & the Cystic Fibrosis Foundation.

The website, Melogia (which in Greek means “with words”) was established by Sarantos, an aspiring singer and song writer.

My goal when you listen to one of my songs is very simple. I want you to feel the need to:

-Dance or move to the groove

-Play the song over and over again

Stephen Vicino is the founder of MusicExistence.com. He created this site to give talented musicians a voice and a way to be discovered.
@@svicino
Previous Out Of My Element Feat Keith Sweat
Next Next Post 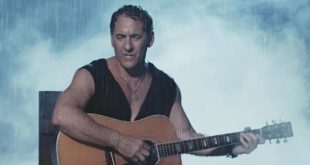