Canadian post-hardcore rockers, Something You Whisper, are prepping to release new material to fans. Today the band has shared a special recording update video with fans for their new EP, ‘From The Other Side’.

SYW released their first single for the EP over the summer called “Who I’ve Become”.

Something You Whisper is showing they have what it takes to become an iconic band in the post-hardcore scene. With a strong Canadian tour history, impressive new singles, and the cultivation of an American fan base, SYW seem destined for the next step.

The Cambridge, Ontario-based band began to take shape in early 2011; harnessing the talent of Wes Will (vocals), Tom McArthur (drums), Kyle Adshade (guitar/vocals), Austin Palladini (guitar/vocals), and Brian Shepherd (bass/vocals). The quintet defines themselves in their songs and performances, emanating an intense energy that masterfully blends with catchy hooks and choruses. This was exemplified in the bands debut EP, “Nostalgia”, with the help of producer Jordan Valeriote (Silverstein, Structures, and Dead and Divine) at Sundown Studios. In February 2013 the band re-issued “Nostalgia”, including two songs previously unavailable and their brand new track “20/20 in the 3rd.”

Something You Whisper has toured extensively in support of their music, in 2012 alone performing 125 shows across Canada as an unsigned artist. They have shared the stage with acts like Sleeping With Sirens, We Came As Romans, Like Moths to Flames, Set It Off, Ice Nine Kills, Abandon All Ships, and The Word Alive. In 2013 SYW embarked on another Canadian tour, playing strong festival dates including select dates with Silverstein and The Wonder Years. The bands epic live show has won thousands of fans over as well as a slot on their local Warped Tour date in the summer of 2012.

In 2013 SYW travelled to Detroit to work with Brent Allen and Devin Oliver of I See Stars. While there they honed their musicianship and song writing skills, which can be seen in their latest single: “Who I’ve Become”. The track was mastered by Joey Sturgis and recorded by Doug Meadows and has garnered the band their highest recognition yet. Since the single’s release, SYW has finished a new EP that’s set to drop in February 2014, highlighted with a new music video and exclusive fan content.

Tags SOMETHING YOU WHISPER

Stephen Vicino is the founder of MusicExistence.com. He created this site to give talented musicians a voice and a way to be discovered.
@@svicino
Previous Introducing Secrets of a Wooden Hut!
Next FATALLY YOURS – Debut video “Exit Sign” 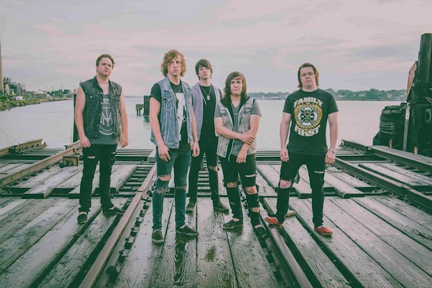