“We approached John Greene with the idea that we wanted to cut in and out from each other, like “vanishing”,” states bassist Ryan Granmaison. “John got the idea to portray a kid that’s pulling through different struggles and hardship. In the end he turns into us, collectively, representing our struggles and hardship with being a band, and even more directly a metal/hip-hop band, as most people judge us before listening to us.”

SCARE DON’T FEAR recently dropped their new EP Destroy | Rebuild, the follow up to their 2010 EP Blinded. The EP consists of seven hard-hitting tracks featuring the band’s unique blend of hip-hop and metalcore, with lyrics playing on the theme of destruction and repair. Many of the EP’s themes are political—discussing the destruction of corruption in the US government and the rebuilding of society. Destroy | Rebuild is produced by Bryce Kariger of Rigerous Recordings.

SCARE DON’T FEAR will be touring in support of Destroy | Rebuild this summer and into the fall. Currently booked shows are listed below:

Stephen Vicino is the founder of MusicExistence.com. He created this site to give talented musicians a voice and a way to be discovered.
@@svicino
Previous Beastie Boy Mike D made a killer Punk/Trap mix
Next Inside Look at The Inverted’s Debut EP – “Devil’s Daughter” 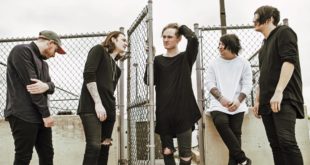