Home / News / Music Video / THE KARMA KILLERS PREMIERE “SHAKE IT OFF” EXCLUSIVELY ON TRUTH OR SARAH!

THE KARMA KILLERS PREMIERE “SHAKE IT OFF” EXCLUSIVELY ON TRUTH OR SARAH!

The Karma Killers teamed up with Truth or Sarah for the exclusive premiere of their second single, “Shake It Off”. The band has eagerly been waiting to share new music with its fans, and felt as though this would be the perfect song to kick off the summer. The gritty underground sound of The Karma Killers can still be heard in “Shake It Off,” just with a tad more bounce in their step this time around. Rather than simply hosting the song, the band had the idea to create a video that includes “Shake It Off” and a spoof commentary on what rock legends, like Mick Jagger, would have to say about rock music today; offering fans a fun alternative to an mp3 or lyric video. The release of the single is also just the beginning of more new music to come from the New Jersey rockers, as they just landed a deal with producers Shep Goodman and Aaron Accetta (Head Automatica // Mandy Moore // Four Year Strong). The band recently entered the studio to begin pre-production and will later be releasing material on Goodman and Accetta’s label, Dirty Canvas (LLC). When discussing the release of the single and their production deal, guitarist Steve Kopf commented,

“Our new single [“Shake It Off”] doesn’t have a deep rooted meaning; it’s really just a fun rock song. The song is about not taking life too seriously, and thinking about the good, not the bad, things in life. And we are excited to begin recording with Shep [Goodman] and Aaron [Accetta]! We just began pre-production and have had the chance to really get to know everybody we’ll be working with. It’s looking to be an exciting process.”

About The Karma Killers | Bands form and bands dismantle. It’s a cycle, which much like a revolving door, never ends. Except every now and then a group of people with the same passion, the same sense of direction, and the same love of music come together to break the cycle. After countless trials and errors in other outfits, Mikey James (Vocals//Guitar), Steve Kopf (Guitar//Vocals), Mango (Bass), and Matthew Fritz (Drums) stepped through the revolving door together and crossed to other side as The Karma Killers.

The undeniable chemistry between the band had them instantaneously getting down to work, but also letting the creative process take them where it may. “The worst thing you can do as a musician is force a song or a feeling. Great ideas are inside everyone, the hardest part is learning to be patient enough to let them come out,” comments Kopf. With that in mind, The Karma Killers scrounged up every penny they could find and left New Jersey to record in Hollywood. During the few months of their west coast adventure, they took to writing and really crafting a genuine sound to offer up. The final product of their efforts wasn’t exactly what the band had hoped it would be. Rather than throwing in the towel, they took it as a lesson to be learned in whom to trust and decided to put forth even more of an effort into their craft upon returning home.

To show for their commitment and continued perseverance, is the band’s single “I’m Okay” and the playful video that accompanies it. A video, that was surprisingly shot through their own efforts by grabbing their instruments and a bottle of wine, and just doing what they do best. The gritty rock sound that The Karma Killers lace with nothing more than honesty, is sure to transcend from these first efforts into forthcoming material. And new sounds aren’t far off, as the band is set to hit the studio with Shep Goodman and Aaron Accetta (Four Year Strong // He Is We // Straylight Run) to begin crafting their next release. All of this is surely just the beginning for The Karma Killers, as they have finally found the perfect elements, in each other and their music, to be a band that stands the test of time.

Stephen Vicino is the founder of MusicExistence.com. He created this site to give talented musicians a voice and a way to be discovered.
@@svicino
Previous Disinterment – Domination Defied | Death Metal Album (2002)
Next AFI PUTTING FINISHING TOUCHES ON NEW ALBUM 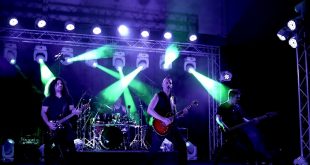